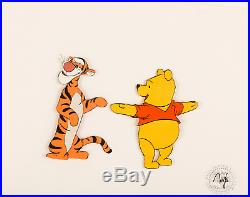 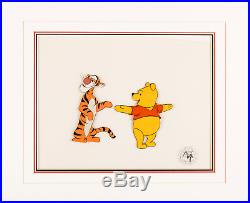 Winnie the Pooh and Tigger Too Production Cel (Walt Disney, 1974). This third theatrical Winnie the Pooh film was inspired by the fourth and seventh chapters of A. Milne's The House on Pooh Corner.

The animated film was directed by John Lounsbery, and released on 12/20/74. It won a Grammy for its score, and an Academy Award nomination for Best Animated Short Film. It was a tour de force of voice talent, starring Sterling Holloway as Winnie the Pooh and Paul Winchell as Tigger.

This is one outstanding hand-painted 16 field production cel setup of both Tigger and Pooh from this film. Great full-figure images of 4.5" and 5". Production cels of this quality for the theatrical releases are very rare. In a mat measuring 19" x 16" with an opening of 13" x 10". The item "Winnie the Pooh and Tigger Too original production cel (Walt Disney, 1974)" is in sale since Monday, January 6, 2020.