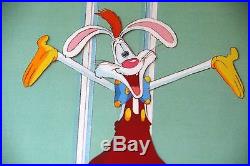 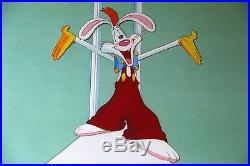 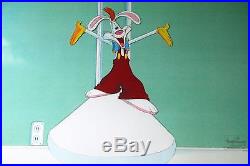 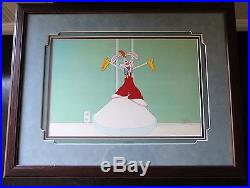 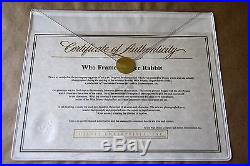 But I'm leaving you with your favorite friend, Roger. He's going to take very, very good care of you. This is a spectacular hand-painted production cel of a full figure Roger Rabbit from the opening cartoon at the beginning of. Entitled "Somethin's Cookin'" (a Maroon Cartoon). Moment comes mid-way through the scene as Roger emerges from inside the wall-mounted ironing board in the midst of Baby Herman's cookie chaos.

This cel can be seen about 2 minutes and 50 seconds into the cartoon. The opening cartoon launched a series of Roger Rabbit shorts (all called Maroon Cartoons), including "Tummy Trouble, " which was shown before Honey, I Shrunk the Kids (1989).

It's hard to get this good of a pose of Roger Rabbit because he is such an expressive character! This dramatic and fun image has been reproduced and used as a color photograph for Charles Fleischer (voice of Roger Rabbit) autographs. The cel has the Walt Disney Animation Production Art seal in the bottom right corner and has a Certificate of Authenticity from Disney with raised seal mounted on the back of the frame. The item "Who Framed Roger Rabbit Somethin's Cookin' Original Production Cel (Disney 1988)" is in sale since Sunday, June 18, 2017.

This item is in the category "Collectibles\Animation Art & Characters\Animation Art\Production Art". The seller is "sirace1" and is located in Los Angeles, California. This item can be shipped to United States.