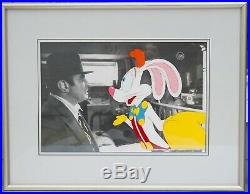 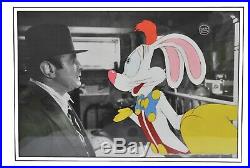 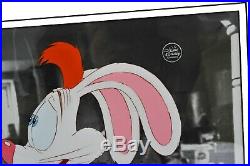 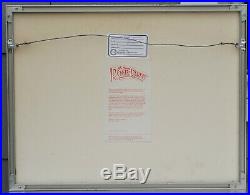 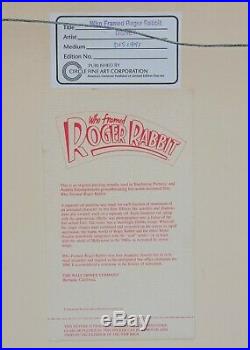 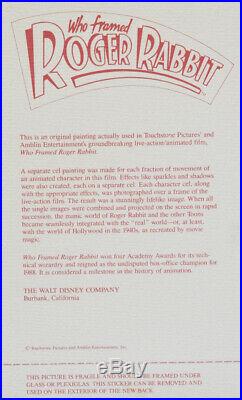 Roger Rabbit: 9.25 x 8.75 inches. This cel was used 51 minutes into the film. Scene where Eddie yells at Roger because he was singing and making everyone laugh.

At the old speakeasy Dolores (Eddies girlfriend, played by Joanna Cassidy) worked when he should have been quite and hiding out. His line for this cell was.

A laugh can be a powerful thing. A separate cel painting was made for each fraction of movement of an animated character in this film. Effects like sparkles and shadows were also created, each on a separate cel. Each character cel, along with the appropriate effects, was photographed over a frame of the live-action film.

The result was a stunningly lifelike image. When all the single images were combined and projected on the screen in rapid succession, the manic world of Roger Rabbit and the other Toons became seamlessly integrated with the "real" worldor, at least. With the world of Hollywood in the 1940s, as recreated by movie magic. Won four Academy Awards for its technical wizardry and reigned as the undisputed box-office champion for 1988. It is considered a milestone in the history of animation.

In Robert Zemeckis's trailblazing combination of animation and live-action, Hollywood's 1940s cartoon stars are a subjugated minority, living in the ghettolike "Toontown" where their movements are sharply monitored by the human power establishment. The Toons are permitted to perform in a Cotton Club-style nightspot but are forbidden to patronize the joint. One of Toontown's leading citizens, whacked-out Roger Rabbit, is framed for the murder of human nightclub owner Marvin Acme (Stubby Kaye).

Private detective Eddie Valiant (Bob Hoskins), whose prejudice against Toons stems from the time that his brother was killed by a falling cartoon piano, reluctantly agrees to clear Roger of the accusation. Most of the sociopolitical undertones of the original novel were weeded out out of the 1988 film version, with emphasis shifted to its basic "evil land developer" plot-line --and, more enjoyably, to a stream of eye-popping special effects. With the combined facilities of animator Richard Williams, Disney, Warner Bros. Steven Spielberg's Amblin Entertainment, and George Lucas's Industrial Light and Magic, the film allows us to believe (at least for 90 minutes) that "toons" exist, and that they are capable of interacting with 3-dimensional human beings. Virtually every major cartoon character of the late 1940s shows up, with the exceptions of Felix the Cat and Popeye the Sailor, whose licensees couldn't come to terms with the producers.

Of the film's newly minted Toons, the most memorable is Roger Rabbit's curvaceous bride Jessica (voiced, uncredited, by Kathleen Turner). The human element is well-represented by Hoskins, Christopher Lloyd, and Joanna Cassidy; also watch for action-film producer Joel Silver as Roger Rabbit's Tex Avery-style director. No Post Office Box address PLEASE. Thank you for looking and the opportunity for your business! The item "Who Framed Roger Rabbit Production Cel Roger & Eddie Valiant (Bob Hoskins)" is in sale since Saturday, December 28, 2019.

This item is in the category "Collectibles\Animation Art & Characters\Animation Art\Production Art". The seller is "timeless2020" and is located in Houston, Texas. This item can be shipped to United States.