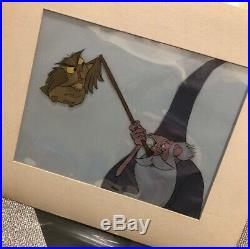 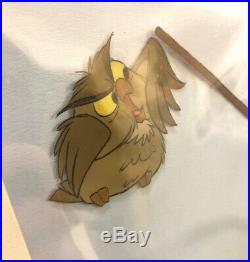 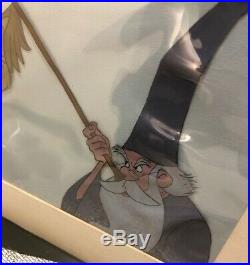 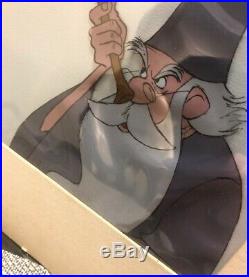 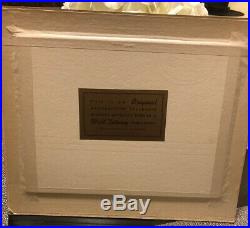 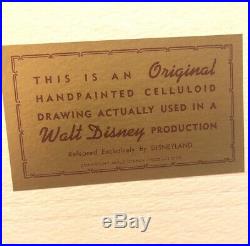 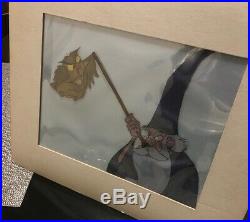 MERLIN & ARCHIMEDES PRODUCTION CELS. Original hand painted production animation cels of Merlin, Archimedes and Owl Wing Flutter Effects from "The Sword In The Stone, " 1963, Walt Disney Studios; Set on a lithographic background; Unframed. "The Sword in the Stone, " 1963 is the 18th full length feature film produced by Walt Disney and it was released on December 25, 1963 by Buena Vista Distribution.

As a wizard, he is very intelligent, has a wide variety of powers, and is considered the most powerful wizard in the world. He has the ability to see into the future, and has the ability to shape-shift. Merlin was animated by Milt Kahl, Frank Thomas, and Ollie Johnston; and voiced by Karl Swenson who was an American theater, radio, film, and television actor. Archimedes (named after the Greek mathematician, physicist, philosopher, engineer, inventor, and astronomer) is Merlin's pet talking owl, who is very well educated and also versed on practical knowledge.

He can be a bit sarcastic and somewhat grouchy, and he is not afraid to point out Merlin's shortcomings. He was based on Merlin's talking owl from "The Sword in the Stone" by T. This is a rare and great image of Merlin, Archimedes, and Owl. Merlin is eyes and mouth open and holding his staff in his right hand. Merlin's highly educated companion is full figure, eyes open.