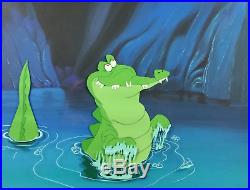 From my personal collection is a production cel of the Tic Toc. Great Close up large image. The Cel Setup consist of two full 16 field keyed cel's. One Cel Of Tic Toc the other the keyed water effects. The cels are numbered 112 & W112 for water.

I have had a custom hand painted background created to match the scene in the film. I have seen Six Tic Toc cels actually from Peter pan in 20 years of collection hard character to find.

The seller is "celgirl29" and is located in Milton, Florida. This item can be shipped worldwide.