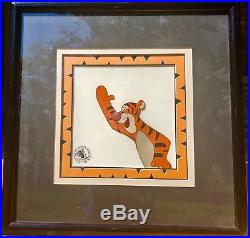 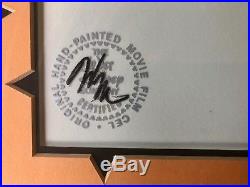 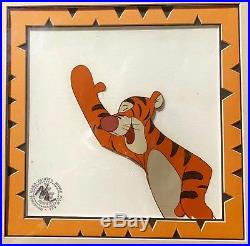 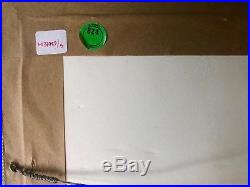 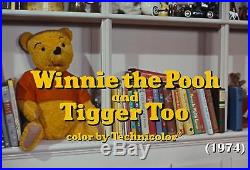 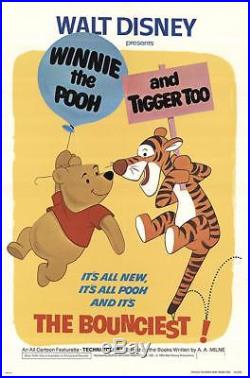 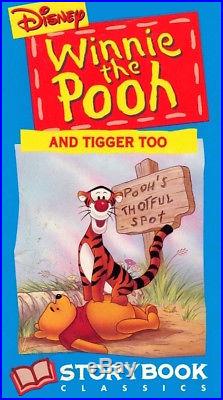 It has the Walt Disney official seal that indicates this to be an actual piece of artwork that was used in the movie. This is not a reproduction or a print. It is part of the sequence where Tigger says, "Ta Ta for Now". The artwork measures approximately 9 X 9 inches(sight).

This is considered to be a large painting of Tigger. The framed work measures 20.5 X 20.5 inches. Framing is top of the line and has some very creative matting. Traditionally, animated films were created by each motion or movement of every character being hand painted on a transparent material called a cel short for celluloid acetate.

These cels whether it is one layer or many characters moving separately on many layers, are then laid over a painted background and photographed by an animation camera to create one single frame of the film. This process is repeated for the entire film to be completed. By painting on cels, the illusion is created of a different world inhabited by the painted characters moving within the background they are placed upon.

Original production cels are the actual cels used to create the animated film (or TV show) for which they were created. Each one has been hand drawn and painted by an artist and has been then photographed over a background by the animation camera to eventually take part in the entire creation of the film. This is very different from what are called Limited Edition cels or Serigraph cels. Limited Edition cels are re-creations of a favorite image or scene which is then hand painted. Serigraph cels are silk-screened re-creations. These production cels are preciously collected and becoming more and more valuable as we progress into the future of animation through computers. There are animation cels from the early days that are valued in the hundreds of thousands of dollars. These cels are rare and there is only one like it in the world! No wonder they collectible and only increase in value.

Rabbit is tired of Tigger always bouncing him, so he gets Pooh and Piglet together to come up with an idea to get the bounce out of Tigger. Rabbit suggests they take him into the middle of nowhere and leave him overnight.

The idea backfires and Rabbit, Piglet and Pooh find themselves lost, but Pooh's tummy guides them home. Then, Tigger and Roo go out for a bounce and get caught in a tree, which Tigger is too afraid to get out of, and Rabbit makes Tigger promise that if they help get Tigger down, that Tigger can never bounce again. So Tigger is rescued and feels sad that he can no longer bounce, but everyone, including Rabbit, agrees they liked the old bouncy Tigger better. The item "Walt Disney Original Hand Painted Production Cel Winnie the Pooh & Tigger Too" is in sale since Saturday, July 21, 2018. This item is in the category "Collectibles\Animation Art & Characters\Animation Art\Production Art". The seller is "printsofpeace" and is located in Fort Mill, South Carolina. This item can be shipped to United States.