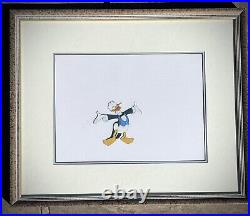 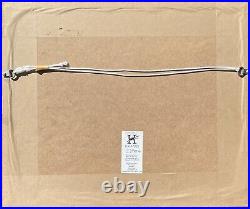 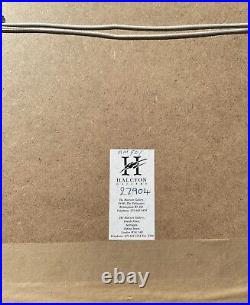 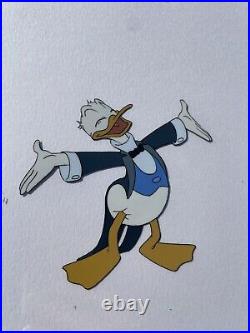 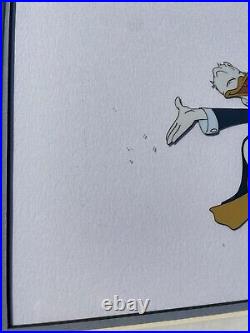 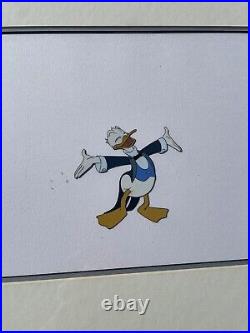 This is one of the last hand-painted production cels of Donald by the feature animation department. The Prince and the Pauper would be the last. A great framed to 21" x 18".

You can see the animated sequence on you tube here. Here's lots of information on the historic event. In 1988, as part of his continuing year long 60th birthday celebration, Mickey Mouse appeared at the Academy Award ceremonies to present the Oscar for Best Animated Short to The Man Who Planted Trees. An animated Donald Duck, Daisy Duck, and Minnie Mouse sat in the audience in the front row as comedian and host Chevy Chase introduced a compilation of film clips of "one of the most beloved cartoon stars of all time, " Mickey Mouse, ending with a clip from the "Sorcerer Apprentice" sequence of Fantasia (1940). At the end of the clip, an animated Sorcerer Mickey stepped off the screen and onto the stage where he was joined by an animated Donald Duck, who thought he was going to be the co-presenter.

Mickey had to gently tell his friend that the Academy had chosen a human for that role. Donald is then yanked off the stage by a hook and with a little Sorcerer Mickey magic finds himself bound up back in his front-row seat. Disney historian Charles Solomon (and author of many fine Disney books) described the scene in the April 13th, 1988, edition of the Los Angeles Times. [Mickey] conjured up a giant package that burst to reveal Tom Selleck. The cartoon mouse exchanged banter with the live actor, walked across the stage and announced one of the nominees.

The envelope flew out of his hand, turned circles in the air and landed on the lectern within Selleck's reach. Although the Disney animation staff and telecast director Marty Pasetta began planning this surprise bit of technical legerdemain in early January, directing animators Mark Henn and Rob Minkoff and free-lance artist Nancy Beiman had to create two minutes of animation in just three weeks-less than half the time the work would ordinarily take. The artists used still photographs of the stage and lectern as guides when they devised the cartoon action.

It's difficult enough to coordinate the movements of actors and cartoon characters in feature films, when all the footage has been shot in advance. The awards show was a live broadcast: The action on nine separate reels of animation had to be matched to Selleck's movements in real time.

The two images were combined electronically by technicians in the control room. The audience in the Shrine Auditorium saw Selleck talking to an empty space on the stage and to Mickey on the monitors. Selleck was familiar to audiences for his role in the popular television series Magnum P. But the previous year he had starred in the successful Touchstone film Three Men and a Baby.

This item is in the category "Collectables\Animation Art & Merchandise\Animation Art". The seller is "phoenixmouse" and is located in this country: GB.