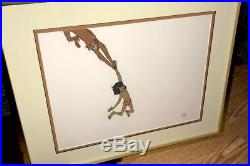 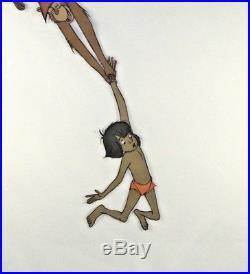 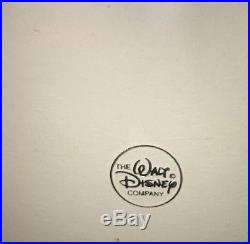 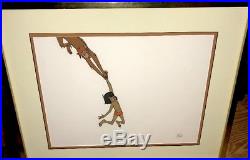 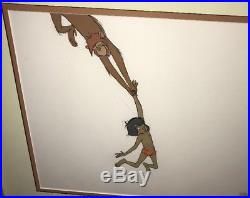 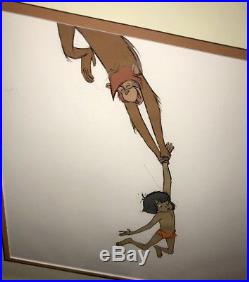 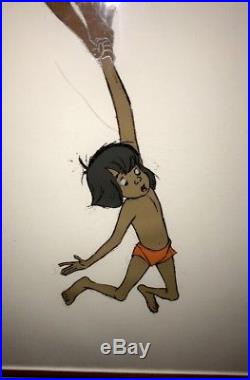 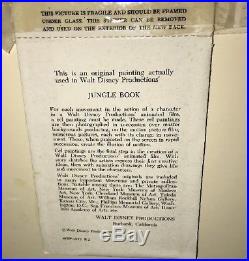 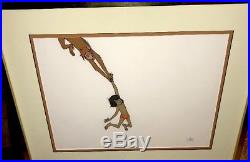 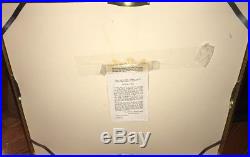 2017 is the 50th Anniversary of the "Jungle Book" This is a "Extremely Rare"Original Disney Production Hand Painted Cel of Disney's.. "The Jungle Book" Featuring "MOWGLI and One of the Monkeys ". Comes framed and matted with Disney's COA... Framed size 20.5" x 16.5" cel 16" x 13" This is Extremely hard to find anywhere...

A Rare find cel has the stamp of authenticity and COA Note concerning lamination: Disney laminated the original cel art in an effort to preserve the integrity of the paint used in production. The lamination process was later found to cause color leaching, creasing, and cracks due to the effects of temperature and humidity. This collection of cel art has creases branching out from either side of figure's head and two small creases on either side of body.

,,, This cel shows very well and stands out in any Animation Collection. The Jungle Book is a 1967 American animated film produced by Walt Disney Productions.

Inspired by the Rudyard Kipling. S book of the same name. It is the 19th animated feature in the Walt Disney Animated Classics. It was the last to be produced by Walt Disney.

Who died during its production. Jungle by wolves, as his friends Bagheera. The bear try to convince him into leaving the jungle before the evil tiger Shere Khan. The early versions of both the screenplay and the soundtrack followed Kipling's work more closely, with a dramatic, dark, and sinister tone which Disney did not want in his family film, leading to writer Bill Peet.

The casting employed famous actors and musicians Phil Harris. As well as Disney regulars such as Sterling Holloway. And the director's son, Bruce Reitherman. The Jungle Book was released on October 18, 1967 to positive reception, with much acclaim to its soundtrack, featuring five songs by the Sherman Brothers. And one by Gilkyson, The Bare Necessities.

We do not mark merchandise values below value or mark items as "gifts" - US and International government regulations prohibit such behavior. Feel free to ask questions....

Also check out our inventory as we will be adding some great, RARE pieces to the store! The item "Vintage Disney Original Production Cel The Jungle Book Mowgli Animation Cell" is in sale since Monday, October 09, 2017. This item is in the category "Collectibles\Disneyana\Contemporary (1968-Now)\Animation Art, Cels".