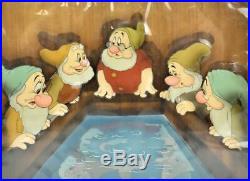 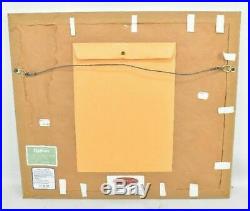 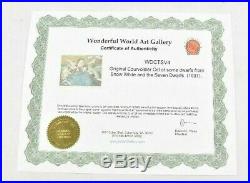 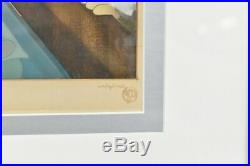 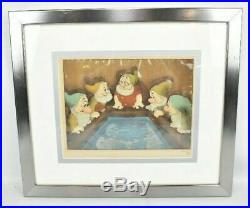 Original Vintage Courvoisier Animation Production Cel. Beautiful original 1937 vintage Disney Courvoisier animation cel from the first Disney full length animated feature film Snow White and the Seven Dwarves from back in 1937 depicting five of the dwarfs leaning over a bath from the scene when they sing'Bluddle Uddle Um Dum' song. Vintage historic cels like this one depicting key characters in such a memorable pose are hard to come by, so do not miss out on adding this beauty to your collection today. This animation cel was actually used in the production of this classic animated feature, and is one of a kind.

C el approximately 21 x 29 cm in size plus the framing. Please ignore any flash, reflection or blur that is visible from taking the photo, this is not visible on the cel at all.

Please ignore any flash, lines, reflection or blur that is visible from taking the photo or scan, this is not visible on the art at all. Never forget the moment, and let it bring a smile to your day every time you take a glance. Fill that important gap in your collection, or start a new collection with the magic of owning Animation Art.

Treat your family, friends, or loved ones, with a present/gift for the Christmas Holidays (Xmas), Birthdays, Valentine's Day, Easter or Mother/Father's Day, and let them share the joy of owning their own piece of Animation Art. As the majority of animation art is now computerized, purchasing a piece can not only provide years of pleasure, but is likely to be a very sound investment. Premier Animation is not responsible for the loss or damage of uninsured item. All emails are responded to within 24 hours of contact. What happens if my item has not arrived or is taking longer than the estimated arrival time? Please do not file a case until you have contacted us to report the loss or delay and we have responded with a resolution. International buyers outside of the UK please take this in to consideration before making contact. What happens if I have changed my mind?

We regret we cannot be held liable for any items you have posted which do not reach our address. Why can some colour's appear slightly different?

Please be aware that there may be a slight variation in color from one computer monitor to another, therefore we recommend contacting us if you have a specific query about a particular colour scheme if this is a major factor in your purchasing decision. Animation Cel - A cel (short for celluloid) is a blank clear plastic sheet used by the studio artist to paint an animated character or object based on the animator's original pencil drawing. The cels are then placed over a background and photographed in sequence to produce an illusion of life in the completed film or cartoon short. Every cel is different but this does not mean that every cel is unique.

Often multiple copies of a cel were created by the Inkers as colour models in order to advance their technique and skills. 12 Field Cel - This refers to the size of the area on the artwork which falls within the sight of the camera. Measuring approximately 10.5" x 12.5" this is the standard size for cels, backgrounds and drawings.

16 Field Cel - This refers to the size of the area on the artwork which falls within the sight of the camera. Measuring approximately 12.5" x 16.5" this is the standard size for cels, backgrounds and drawings.

Production Cel - Any cel created for the production of an animated film, commercial or cartoon short. This does not necessarily mean that the piece appears in the film. Model cels and preliminary art are all production artwork. Limited Edition Cel - A non production hand painted cel created for sale to the collectors market. It is produced in fixed limited quantities and is easily identified by a fraction (150/500) in the lower right hand corner. They were not used in films or cartoon shorts, and the original intent was to recreate the original production cels. Nowadays many studios release new images not based on production artwork. Sericel (Serigraph) - A non production cel created by means of a printing process similar to silk screening. No work is done by hand, therefore no painting or inking is involved. They are often produced in limited quantities of 300 - 5000, and they are marketed as a low cost alternative to production and limited edition cels. Animation Drawing - A drawing on paper in pencil, sometimes coloured which is created by a studio artist of an animated character or object for which the cels are later created. Production Background - A background created for use in a production of an animated film.

It must be noted that a production background may not necessarily originate from the same production that the cel is from. Matching Master Background / Key master Setup - This is often referred to as a key master background setup, but is simply a cel or cels with the background from the same scene that were originally photographed. When framed these will look exactly as they do in the original film or cartoon short.

Lithograph - These images (prints) are created using a print process. They are produced in limited quantities, numbered and signed or are mass produced. Non limited pieces become discontinued and are harder to locate, therefore increasing in value.

Giclee - The French term "Giclée", literally meaning "spray of ink, " is used to describe these prints. Four precision nozzles spray up to a million microscopic droplets per second on to fine art paper. Then, each piece of paper is individually hand-mounted. Displaying a full colour spectrum, the prints are lush and velvety, capturing the subtle nuances of the original artwork. - Animation Art is more than just the cels and backgrounds seen by a camera in the finished version of an animated film, cartoon, short or commercial.

It also includes inspirational sketches and paintings, story ideas, character models, and drawings used in the making of the animated film, as well as post production models and publicity work, and all other works prepared after its completion. Why is Animation Art important? - Animation Art has become a universal art form that has entertained, informed, and instructed generations around the world for almost 100 years. Animation speaks to everyone in a universal language, regardless of age, creed, or nationality.

What makes Animation Art valuable? - Age and rarity are two important factors. What character(s) are in the Artwork, and what expressions they are showing. Figures in a full pose position are normally more sought after than a head shot or half body pose. Memorable scenes from classic films or cartoons create a high value. Villains and Princesses are also valuable. Signatures of artists connected with a specific production can often increase the value. Walt Disney's signature on the mount/mat will also increase the value, as he never signed the artwork itself.

Should I invest in Animation Art? You can view past auctions at Christie's to see the value of vintage Disney and Warner pieces.

The value of Animation Art is increasing more rapidly than any other Art form on the collectable market. Enjoy it to the full, and you will receive the greatest return on your investment, the joy of owning a moment in film making history that will never be repeated again. - Premier Animation is an online gallery offering some of the finest vintage and contemporary Animation Art on the net. Are limited edition cels hand painted?

- Yes limited edition cels are hand painted reproductions of famous scenes, or are sometimes newly created ones that often depict sports scenes, or mix characters together that ordinarily would not appear together. Some collectors also quite like the beautiful colour reproduction backgrounds that accompany the pieces as well. How many cels are used in a typical cartoon? - A film runs at 24 frames per second. Therefore the most any cartoon can be animated to is 24 fps. Budget films usually run at 12 cels per second, each cel being shot twice.

However, lower budget cartoons can, and usually do, use the same cel three or more times. The more a cel is used, the "jerkier" the final cartoon will look. For a high budget cartoon, that runs for 8 minutes, there are roughly 11,520 hand painted cels used... Which is a lot of hard skilled work (just think how many cels are used in a full length feature film). There is a whole new question that arises from this, and that is how many collectable cels are available from an 8 minute cartoon?

Alternatively, if an 8 minute cartoon is animated at 24 fps, are there 11,520 collectable cels for sale? The answer is simply no. Thank You For Your Interest. The item "Vintage 1937 Walt Disney Courvoisier Production Cel Snow White & 7 Dwarfs Bath" is in sale since Friday, January 10, 2020.