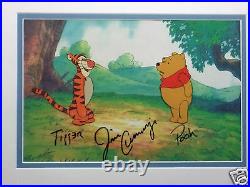 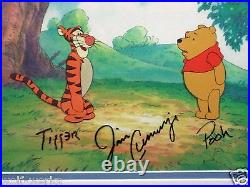 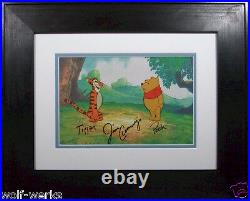 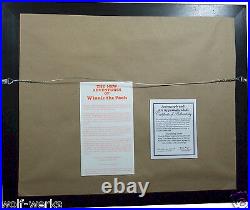 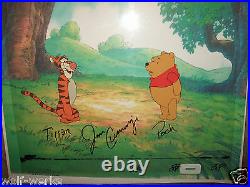 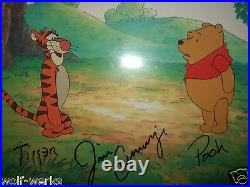 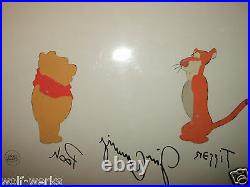 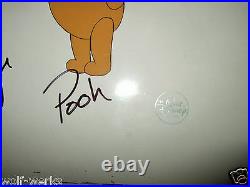 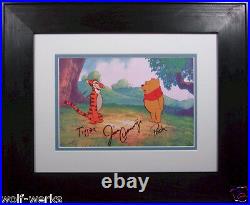 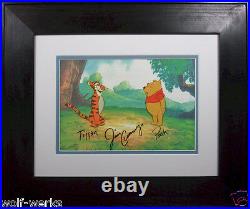 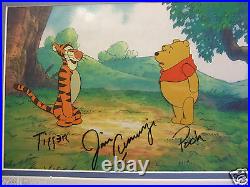 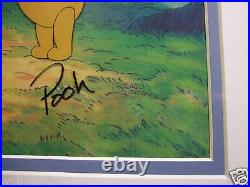 Animation art Original Disney Studio production cel. One of a kind, hand-painted cel from the 1980s TV Series " The New Adventures of Winnie the Pooh ". A large image of Tigger and Winnie the Pooh. Cel paint is in very good condition. Cel size is 12x10.5 inches in size.

Characters are about 4x 3 inches each. Pooh might be a little smaller.

Disney Seal is embossed in the lower right corner. Comes with the Disney issued printed background.

The background was produced by Disney from original artwork in their vault. Includes the Disney Issued Certificate of Authenticity.

Hand Signed by the voice of Tigger and Winnie the Pooh.... Jim also voices Winnie the Pooh in the Christopher Robin 2018 movie with Ewan McGregor. Brand NEW Solid Wood Frame.

Finished off with dust-paper backing and a wire hanger. Frame size is about 21 x 17 inches.

It is a production cel, which means NO two cels are the same. This is NOT a Limited Edition, it is One-of-a Kind. James Jonah Cummings (born November 3, 1952) is an American voice actor and singer, who has appeared in almost 400 roles. He is known for voicing the title character from Darkwing Duck, Dr. Robotnik from Sonic the Hedgehog, Pete, Winnie the Pooh, Tigger, Bonkers D.

He has performed in numerous Disney and DreamWorks animations including Aladdin, The Lion King, Balto, Antz, The Road to El Dorado, Shrek, and The Princess and the Frog. He has also provided voice-over work for video games, such as Icewind Dale, Fallout, The Elder Scrolls V: Skyrim, Baldur's Gate, Mass Effect 2, Star Wars: The Old Republic, World of Warcraft: Mists of Pandaria, World of Warcraft: Legion, and Splatterhouse other voice characters voiced as Biker Mice from Mars, Iron Man, Spider-Man: The Animated Series, Teenage Mutant Ninja Turtles, The Incredible Hulk, Batman: The Animated Series and Fantastic Four.

He has been the voice of Pooh since 1988. Including the latest "Christopher Robin" live action movie. The item "Tigger Pooh Disney production cel Seal background New Frame Disney issued CoA" is in sale since Friday, July 24, 2020. This item is in the category "Collectibles\Animation Art & Characters\Animation Art\Production Art". The seller is "toon-city" and is located in San Diego, California.