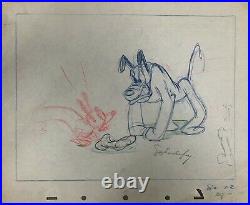 Subject: Pluto and Dinah Dachshund. Born in Seattle, Washington, Homer Brightman writer (147credits), director (1 credit), story artist and animator. He joined Disney Studio in 1935. During those15 years often call the "Golden Age of Disney Animation " and he worked on the SnowWhite and the Seven Dwarfs, Cinderella and Oscar winning short "Lend a Paw" aswell as many more. After Disney he worked for Walter Lantz Production, MGMcartoon studio, UPA and the other top Animation houses of the time.

The list offilms are to long to name but his hands were in on the most memorable animationof the time. From Cinderella, Mickey Mouse, Donald Duck, Chilly Willy and thepopular, Woody Woodpecker.

He alsopublished (under Disney nameplate) many books including Mary Poppins. His book" Life in the MouseHouse" was published after his death to protect his fellow Disney co-workers. This item is in the category "Collectibles\Animation Art & Merchandise\Animation Art". The seller is "dast-2890" and is located in this country: US. This item can be shipped to United States.