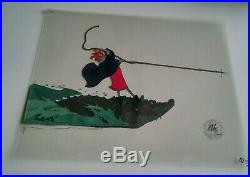 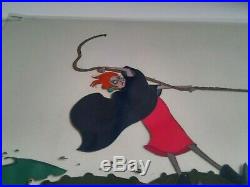 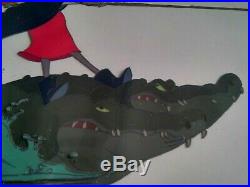 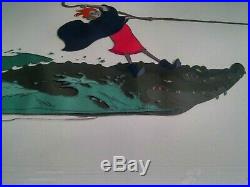 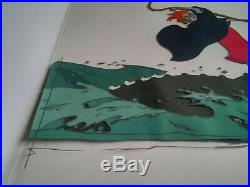 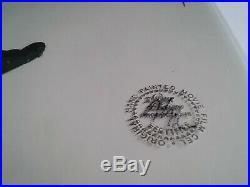 ORIGINAL MADAME MEDUSA/ALLIGATORS PRODUCTION CEL - 1977. This original hand-painted production cel features Madame Medusa riding her two Alligators, Brutus and Nero. Release date of the film is June 22, 1977. The Rescuers is a 1977 American animated adventure film produced by Walt Disney Productions and released by Buena Vista Distribution. The 23rd Disney animated feature film is about the Rescue Aid Society, an international mouse organization headquartered in New York City and shadowing the United Nations, dedicated to helping abduction victims around the world at large. Two of these mice, jittery janitor Bernard (Bob Newhart) and his co-agent, the elegant Miss Bianca (Eva Gabor), set out to rescue Penny (Michelle Stacy), an orphan girl being held prisoner in the Devil's Bayou by treasure huntress Madame Medusa (Geraldine Page). The film is based on a series of books by Margery Sharp, most notably The Rescuers and Miss Bianca. Madame Medusa is a greedy, redheaded, wicked pawnshop owner. Upon discovering the Devil's Eye diamond hidden in a blowhole, she kidnaps the small orphan, Penny, to retrieve it for her, as Penny is the only one small enough to fit in it.

In the end, she is thwarted and presumably eaten by her two alligators, Brutus and Nero. This film marked the last joint effort by veterans Milt Kahl, Ollie Johnston, and Frank Thomas, and the first Disney film worked on by Don Bluth as a directing animator, instead of an assistant animator. Other animators who stepped up during production were Glen Keane, Ron Clements, and Andy Gaskill, who would all play an important role in the Disney Renaissance. The image of Madame Medusa is approximately 5 1/2 inches tall and the alligators are approximately 10 1/2 inches long. The combined height of Madame Medusa and the alligators is approximately 6 3/4 inches.

The entire cel measures approximately 15 1/4 inches x 12 1/2 inches. A Disney seal is on the lower right side of the cel. Item comes from a smoke-free and pet-free environment. Please carefully view all photos. Please note there there is some glare on the photos caused by the camera flash reflecting off the cel. The item "THE RESCUERS DISNEY ORIGINAL MADAME MEDUSA/ALLIGATORS PRODUCTION CEL 1977" is in sale since Saturday, January 18, 2020. This item is in the category "Collectibles\Animation Art & Characters\Animation Art\Production Art". The seller is "too2muchstuff" and is located in Bedminster, Pennsylvania. This item can be shipped to United States.