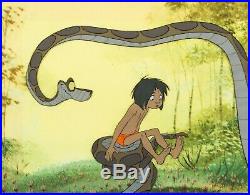 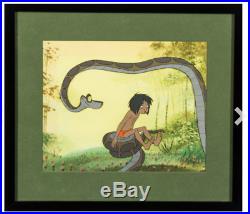 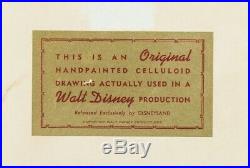 The cel featuring Kaa and Mowgli was hand-painted on 12 field acetate with a large image area of 10" x 8". The cel is placed on a print background for presentation purposes.

Artwork is in Very Good condition. From the MacLaughlin Family Disney Collection. The Cricket Gallery Specializing in Animation Art Since 1987 Authenticity Guaranteed. We treat every item we sell with the extra care it deserves. Only the cost we pay is passed along to you.

If you need any help tracking a package please let us know. We do not mark merchandise values below value or mark items as "gifts" - US and International government regulations prohibit such behavior. Major defects will be pointed out in the description. We have been specializing in Animation Art for over 18 years. We have been the authorized dealers for the Walt Disney Classics Collection (WDCC) and forall major studios including Walt Disney, Warner Bros. Hanna Barbera, Twentieth Century Fox & Nickelodeon. We Guarantee The Authenticity of Every Item We Sell. We welcome your comments and suggestions and strive to give you five star service.

The item "The Jungle Book Mowgli and Kaa Original Production Cel Walt Disney 1967" is in sale since Thursday, January 23, 2020. This item is in the category "Collectibles\Animation Art & Characters\Animation Art\Production Art". The seller is "milyjam" and is located in Alpharetta, Georgia. This item can be shipped worldwide.