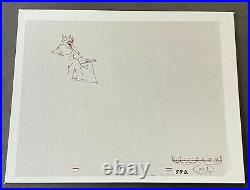 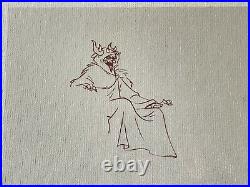 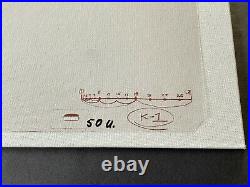 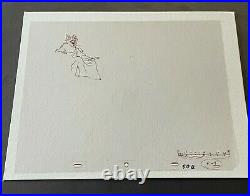 This listing is for an original production model cel of the Horned King from Disney's (1985) The Black Cauldron. Measurements: 16 x 12.5'' roughly. Item is in good condition, as recently pictured. Model cels like this were created from key drawings to test the colors of the character and to maintain color consistency. They were made the exact same way productions cels were, but for a completely different purpose.

This long-shot of the Horned King was from Phil Nibbelink's key pose drawing. Because he drew so clean, the original drawing was used in the final film as seen in the attached screengrabs. I acquired this from the estate of someone who worked in the animation department for'xerox/animation photo transfer' which is probably the only reason this piece survived. Productions wouldn't have saved cels like this, which is why you won't find any others like it that were unpainted. The Black Cauldron is a 1985 American animated dark fantasy adventure film produced by Walt Disney Productions in association with Silver Screen Partners II and released by Walt Disney Pictures. The 25th Disney animated feature film, it is loosely based on the first two books in The Chronicles of Prydain by Lloyd Alexander, a series of five novels that are, in turn, based on Welsh mythology. Character background: The Horned King is the main antagonist of Disney's 1985 animated feature film, The Black Cauldron.

His main goal was to find the Black Cauldron and use its power to unleash an army of immortal warriors called the Cauldron Born. The Horned King has a vast army under him, which includes the troll-like Creeper, the hunters of Annuvin, the draconic Gwythaints, and, obviously, the Cauldron Born. This item is in the category "Collectibles\Animation Art & Merchandise\Animation Art". The seller is "homers0dyssey" and is located in this country: US.