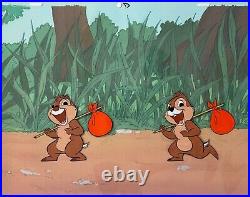 The Magical World of Disney (1959) The Adventures of Chip n Dale. Walt has left a message on a tape recorder on his desk, explaining that because he is unable to be there personally, he arranged for guest hosts - Chip'n' Dale to fill in. The two chipmunks have a book with them filled with stories of their exploits. Original 12 field (10.5" x 12") hand painted cel on a reproduction background.

Certificate of Authenticity (COA) from The Cricket Gallery. Chip and Dale are a duo of cartoon characters created in 1943 by The Walt Disney Company.

As anthropomorphic chipmunk brothers, their names are a pun on the name of the 18th-century cabinet maker and furniture designer Thomas Chippendale. This was suggested by Bill "Tex" Henson, a story artist at the studio.

This item is in the category "Collectibles\Animation Art & Merchandise\Animation Art". The seller is "milyjam" and is located in this country: US. This item can be shipped worldwide.