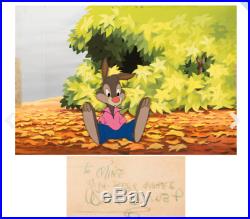 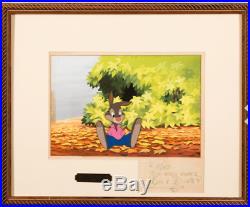 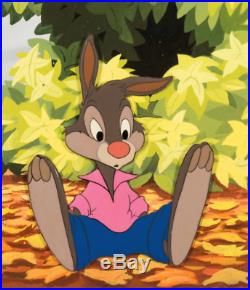 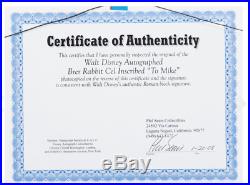 Sings Br'er Rabbit as he leads Br'er Fox and Br'er Bear to the "Laughin' Place" as he is held captive. Little do Br'er Fox and Br'er Bear know it's a trap filled with a bee hive! This is a rare hand-inked, hand-painted production cel of Br'er Rabbit. Cel is trimmed to image and mounted to a clear cel of 9" x 7". This very rare production cel is on a trimmed hand-painted production/pre-production background of The Laughin' Place.

A bold large Walt Disney signature reads, "To Mike with Best Wishes Walt Disney" in Conté crayon. The setup with Walt Disney signature may have been an Art Props department studio gift. This rare piece is in a frame of 21" x 17" with a mat opening of 12.5" x 9". Artwork has some tape on background border, otherwise, Very Good condition.

Walt Disney signature has a Phil Sears Letter of Authenticity on reverse of frame. The item "Song of the South Production Cel Master BackgroundWalt Disney Signature 1946" is in sale since Friday, April 3, 2020. This item is in the category "Collectibles\Animation Art & Characters\Animation Art\Production Art". The seller is "milyjam" and is located in Alpharetta, Georgia. This item can be shipped to United States.