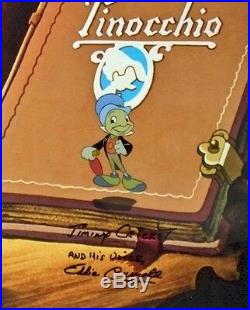 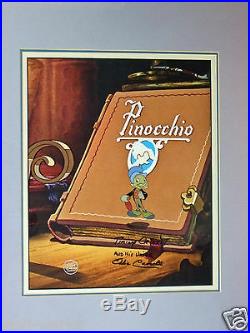 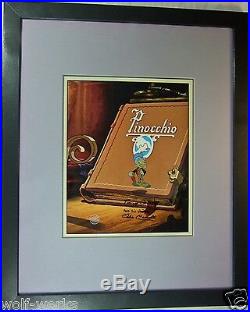 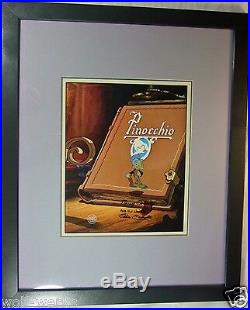 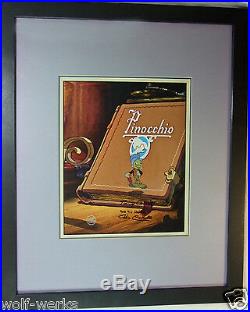 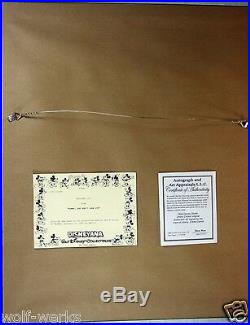 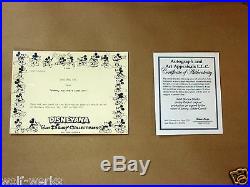 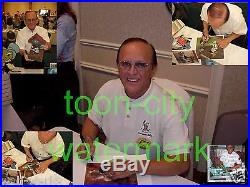 And of course it's been signed by Jiminy's voice, my friend Eddie Carroll. We have created a custom made background inspired by the beginning of Pinocchio. Background is a 11 x 14 photograph. Jiminy is 2.5 x 1.5 in size. Cel is in mint condition and is 11 x14 inches in size with 3 pinch whole registration. Brand new solid wood frame, with a slight textured. Brown dust-paper backing with Certificates of Authenticity attached to the back.

This piece is ready to hang out of the box. Eddie Carroll (September 5, 1933 April 6, 2010) was a Canadian voice actor who is best known as the second performer to provide the voice for Jiminy Cricket, a role he played for over 35 years. In Canada he studied at the Orion theater. After moving to Hollywood in 1956, he was drafted into the US Army. He performed with the Armed Forces Radio Service and the 6th Army Chorus.

In 1959 he took the professional name Eddie Carroll. In 1960 Carroll released a comedy album, On Fraternity Row. " In 1962 he co-wrote the song "How Is Julie? Which was recorded by The Lettermen. Starting in the early 1960s Carroll appeared in numerous television programs and commercials.

In 1970, he and business partner Jamie Farr syndicated a sports-talk program "Man to Man" through MGM Television. He took over the role of Jiminy Cricket for Walt Disney Productions in 1973 after the death of original voice actor Cliff Edwards in 1971. From 1983 until his death in 2010 Carroll traveled with two one-man shows portraying comedian Jack Benny: "A Small Eternity with Jack Benny" and Jack Benny: Laughter in Bloom. In 1995-96 he toured with a production of The Odd Couple. In later years, he attended numerous conventions and gatherings for both Disney fans and devotees of old-time radio.