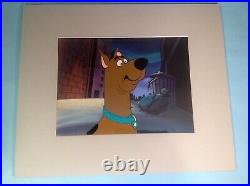 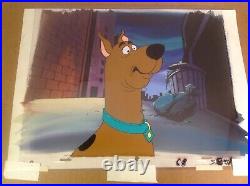 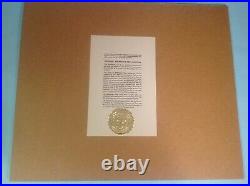 Hanna Barbera 1970's animation production cel of Scooby Doo complete with painted production background. This is a 2 cel setup and is professionally matted in an 13" by 15" acid free beveled cut matt, ready for framing. This production cel is frommthe early 70's when the series was being produced at Hanna Barbera Cartoon Studios in California, not to be confused with the later Scooby Doo cartoons that were produced overseas in the 80's and 90's whose production artwork is now flooding the market.

To put it bluntly, the art work and animation in the newer overseas versions was bad. Very few production cels have survived from the original series and this is one that has that is in beautiful condition as shown in the photos. Vintage Scooby Doo production art is now very sought after by collectors and when they are gone, they are gone. This is truly a nice closeup pose of Scooby!