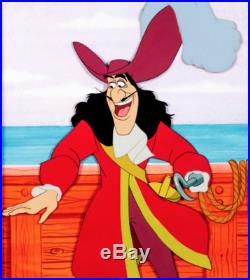 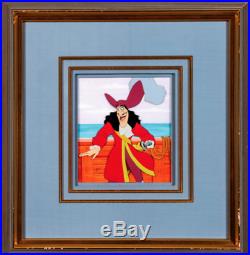 Peter Pan Captain Hook Production Cel and Painted Background (Walt Disney, 1953). A pirate's life is wonderful life! Sings Captain Hook's pirate crew after capturing Wendy, Michael, and John and tying them up on the Jolly Roger. Frank Thomas brilliantly animated Captain Hook, who was voiced by the legendary Hans Conrad. This is a remarkable hand-inked, hand-painted trimmed production cel of Captain Hook who stands of 8.25 tall.

He is in full costume complete with hat, sword, and hook! Walt Disney insisted that Hook shouldn't die in this film because audiences would love him too much. The cel is over a custom hand-painted background and framed under Plexiglas with a mat opening of 7.5" x 8.5" in a 20" x 21" frame.

The seller is "milyjam" and is located in Alpharetta, Georgia. This item can be shipped to United States.