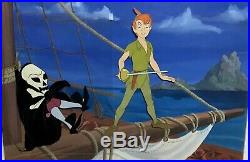 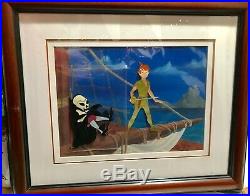 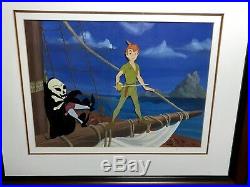 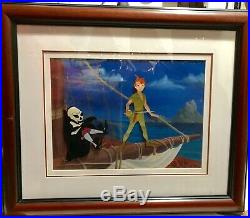 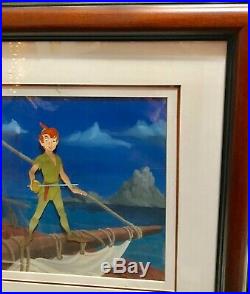 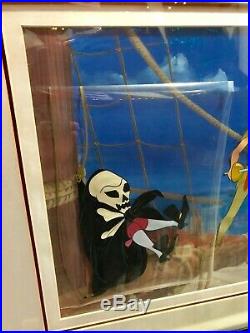 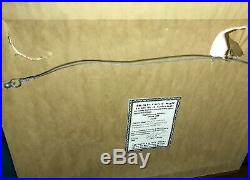 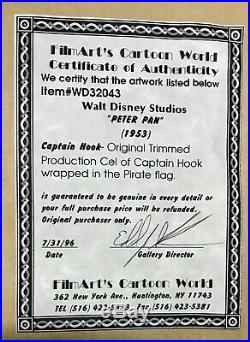 As buyers from many of my other auctions will gladly tell you, I have a large collection of original Disney memorabilia! This very special sale is for TWO cels used in the production of the 1953 classic Walt Disney's PETER PAN! In this set-up, a full figure Peter Pan (face front with eyes open - not many of those exist) stands triumphantly with Captain Hook's captured sword in hand. Next to him, a second cel of defeated Captain Hook trapped under his Jolly Roger flag. Together, the two cels depict the sequence in which the boy who won't grow up has valiantly saved Wendy, Michael, John, and the Lost Boys from the villainous pirate.

Pan appears at 1:12:07. Hook appears at 1:11:25. The production cels are set-up with a non-production, hand-painted background in a solid oak frame with UV protected plexiglass window. The Pan cel is complete. The cel with Hook has been trimmed to 8.5" x 6.75".

It has a small piece of clear tape on the extreme right corner that does not affect the character. The primary photo best depicts the true colors in the artwork. And from other angles and lighting affect the look of the colors in additional pictures. Cels, the background, and the frame. The frame measures 20.5" x 24.5".

The size of this piece is 12 Field (11" x 13") and the character size is 9"h x 9.5"w. Frame has some scuffing along the bottom due to storage and one tiny scuff on the right side; these are easily fixed. Authenticity: both animation cels are guaranteed authentic! A Certificate of Authenticity from Film Art's Cartoon World accompanies the Hook cel.

He determined the cel to be original with only the slightest restoration - two tiny spots impossible to see from the cel front. Both cels are in excellent condition. Hand-painted background (created specifically for this display) is in mint condition. The entire set-up is a beautiful, museum quality piece that will live in the heart of its new owner forever just like the great Peter Pan himself. The item "Peter Pan Animation Production Cel Walt Disney 1953 2 cels Pan & Captain Hook" is in sale since Sunday, March 1, 2020. This item is in the category "Collectibles\Disneyana\Vintage (Pre-1968)\Animation Art, Cels". The seller is "atreyula" and is located in North Hollywood, California. This item can be shipped to United States.