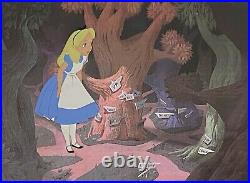 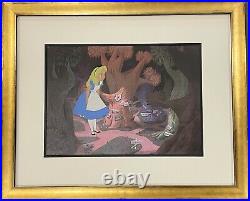 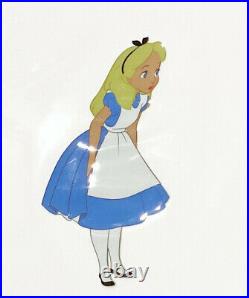 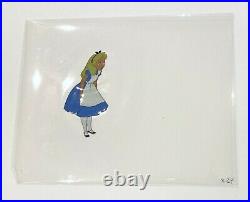 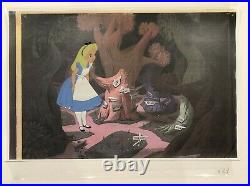 Studio: Walt Disney Film: Alice in Wonderland Medium: Production cel on a color copy background Date: 1951 Character: Alice Edition: One of a kind Framed: Yes Size: 18" x 22" framed. A certificate of authenticity guaranteeing the authenticity of this artwork for life will be issued by Georgetown Frame Shoppe. This work of art was authenticated by Peter Bortz, gallery owner of Georgetown Frame Shoppe. Peter Bortz has been an animation art dealer since 1989.

Aside from having the experience and expertise of being an international dealer for over 20 years, Peter Bortz has an extensive collection of catalogues raisonnes from which to reference and authenticate a work of art, as well as an in depth knowledge of the variety of production processes, media, and techniques which can additionally serve to identify a work as being genuine. Peter Bortz provided an oral confirmation that this work of art is authentic. In business since 1989, our large collection of animation art includes art from Warner Brothers Studios, Walt Disney Studios, Hanna Barbera, MGM Studios, and 20th Century Fox as well a smaller studios. Some of the films we specialize in are. The Grinch Who Stole Christmas.

To view some of our fabulous collection in person, please visit Georgetown Frame Shoppe at 2902 1/2 M Street NW in Georgetown, Washington, DC. Animation Sensations can accept your offer, reject it, or make a counteroffer. For anywhere in the U. The item "Original Walt Disney Production Cel of Alice from Alice in Wonderland (1951)" is in sale since Thursday, September 24, 2020. This item is in the category "Collectibles\Animation Art & Characters\Animation Art\Production Art".