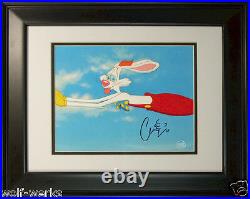 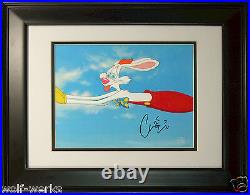 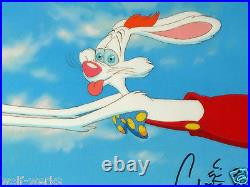 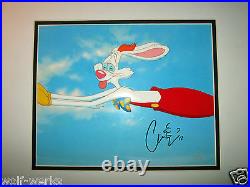 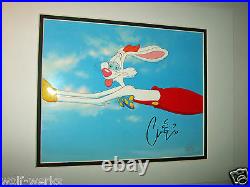 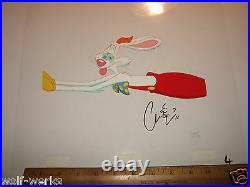 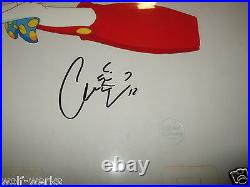 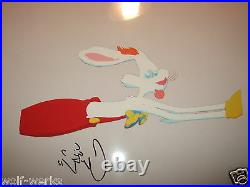 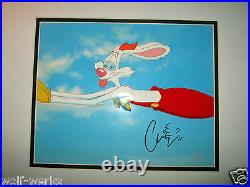 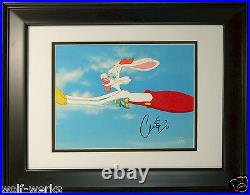 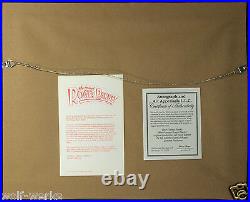 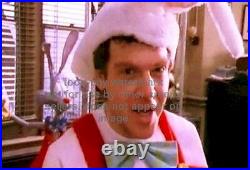 The official Disney Seal embossed in the lower right corner. Comes with a Disney Certificate of Authenticity. Piece is displayed over a color copy background of a blue sky. Looks like Roger is Sticking his tongue out as he goes by.

Roger has registration along his hands and mid-knee. This is Not a sericel. Brand new archival museum quality Matting and glass.

Frame is less than 2 years old. So I would call that used, with few minor blemishes. I didn't even notice them until I took it off the wall, so I think they're fine. Matt opening is roughly 8x10 inches, frame size is 16x13 inches. BONUS This piece has been hand signed by the original voice of Roger Rabbit & Benny the Cab, from the 1988 movie & Disneyland's Cartoon Spin Attraction in Toontown..... Charles Fleischer (born August 27, 1950) is an American actor, comedian and voice artist. Fleischer was born in Washington, D. And attended Southampton College of Long Island University. As a child, he is reported to have spent several summers at Kamp Kewanee in La Plume, Pennsylvania.

He is known as the voices of both Roger Rabbit and Benny The Cab in Disney and Amblin Entertainment's 1988 live action/animated hybrid film Who Framed Roger Rabbit. After that film's success, Fleischer continued to perform the voice of Roger in several television and theme park appearances, and in three follow-up short subjects to the original film. Other voice roles for Fleischer include The Polar Express and We're Back! On-screen roles include Back to the Future Part II and Gridlock'd. Fleischer has had roles on TV shows: he has had a recurring role on the 1970s hit TV series Welcome Back, Kotter as Carvelli, as Chuck on the hit ABC series Laverne & Shirley, and on the popular Disney cartoon series House of Mouse as the voice of Benny The Cab.