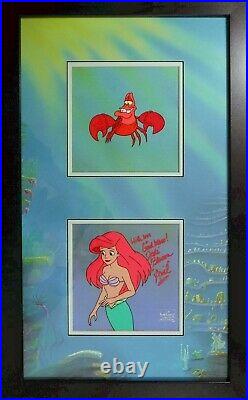 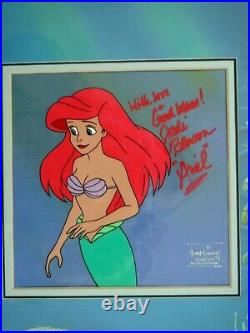 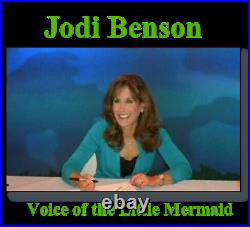 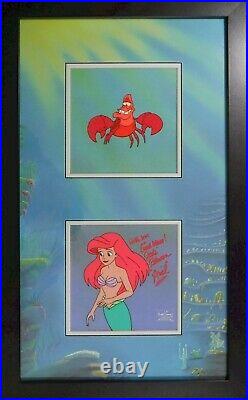 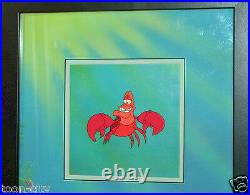 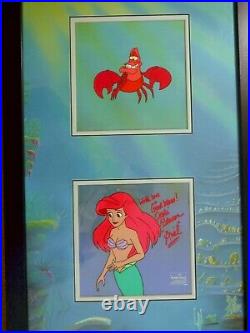 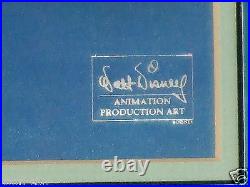 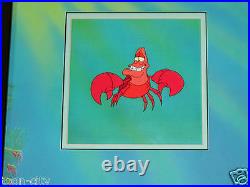 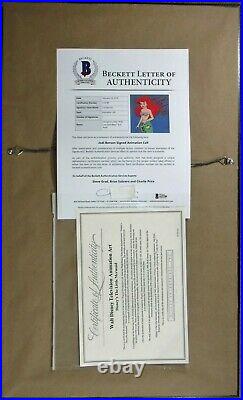 Each cel is One-of-a kind, hand painted cels from the 1990s TV Series "Disney's The Little Mermaid" which premiered in 1992. Each Cel is 8x8 inches in size. Ariel is about 6.5 x 4.5 while Sebastian is a huge 5 x 4 inches. Paint on each of the cels, are in great condition.

Lots of red, green and yellow paint, all in great condition. Disney seal in the lower right corner of Ariel cel.

Piece comes with original Disney Studio issued Certificate of Authenticity. Comes with a Disney issued color background placed behind each cel. This piece has been hand signed by the Original Voice of Arial...

Hand signed in Red Paint Pen, so it will remain permanent. Created in 1999, Disney commission a limited number of Serigraph (Silk-screened) mats of Ariel's Undersea collection room, as seen in the movie. Beautiful colors of the under sea world. We acquired this piece already framed, but we though a NEW frame would be more appealing.

So we added this New Solid Wood Custom cut frame. New Dust-paper backing, new plexiglass and a wire hanger on the back. Original Disney COA is attached to the back. This piece is ready to hang out of the box! BIO: Jodi Benson (born October 10, 1961) is an American actress, voice actress and singer.

She is best known for providing both the speaking and the singing voice of Disney's Princess Ariel in The Little Mermaid and its sequel, prequel, and television series spinoff. Benson voiced the character Barbie in the 1999 Golden Globe-winning movie Toy Story 2 and its 2010 Academy Award-winning sequel Toy Story 3. She also voiced Barbie in the Toy Story cartoon Hawaiian Vacation. For her contributions to the Disney company, Benson was named a Disney Legend in 2011.

While being a Disney Legend, she also voiced Jane Doe and Patsy Smiles in Cartoon Network's Camp Lazlo. She also voiced the character Tula in Fox's animated series The Pirates of Dark Water. The item "Original Disney production Cel The Little Mermaid Ariel Flounder Official CoA" is in sale since Friday, July 24, 2020. This item is in the category "Collectibles\Disneyana\Contemporary (1968-Now)\Animation Art, Cels".