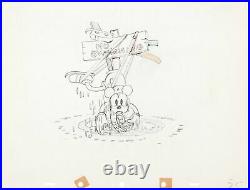 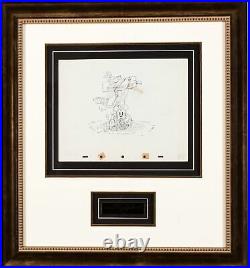 Ice skating Mickey took a wrong turn in this hilarious drawing, from the finale of the segment in which Mickey shows Minnie how to ice skate. On Ice is an animated short subject film produced by Walt Disney and released on 9/28/35. The short feature the voice talents of Pinto Colvig as Goofy, Clarence Nash as Donald Duck and Walt Disney as Mickey Mouse. On Ice used 10 animators including two of "Walt's Nine Old Men", Milt Kahl and Eric Larson along with Art Babbit who is credited with developing Goofy. The cartoon revolves around three different storylines that all take place on a frozen lake during the winter. In the first storyline Mickey helps Minnie learn how to skate. The drawing we have is from that sequence. Rendered in graphite, red, yellow and blue pencil on a 12 field 2-peghole sheet of animation paper numbered 55, with an overall image size of 6" x 5.75". Matted and framed with a plaque, using Plexiglas, for an overall size of 22.5" x 24.5".

Art is in Very Good condition. From the MacLaughlin Family Disney Collection. The item "On Ice Mickey Mouse 1935 Walt Disney Production Cel Drawing" is in sale since Tuesday, February 16, 2021.