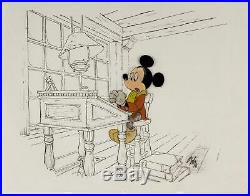 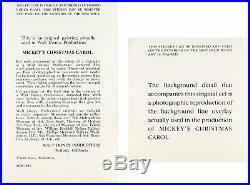 Mickey Mouse Production Cel (Walt Disney, 1983). Was originally intended to debut as a prime-time special on CBS in 1982. However, due to an animators' strike, the special was not finished in time for Christmas of that year. It was billed as Mickey's "big-screen comeback" because his last appearance in a theatrical cartoon was 30 years earlier in the 1953 short. This is afantastic production cel of Mickey Mouse as Bob Cratchit sitting at his desk.

The images of Bob (or Mickey) measures 5.25 in this hand-painted 16 field cel. The cel is paired with a line copy cel of the original background. Included is a Certificate of Authenticity issued by Disney. The cel has been laminated by the studio and shows some lamination failure around the character, please look closely at photos. From the Lee Reem Collection.

In the United States, it was first aired on television on , on December 10, 1984. The film was nominated for an in , but lost to Jimmy Picker's. It was the first nomination for a Mickey Mouse short since (1948). The item "Mickey's Christmas Carol Mickey Mouse Production Cel Disney 1983" is in sale since Wednesday, August 19, 2020.

This item is in the category "Collectibles\Animation Art & Characters\Animation Art\Limited Editions". The seller is "milyjam" and is located in Alpharetta, Georgia.