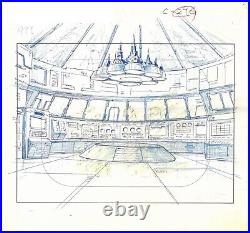 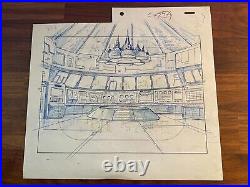 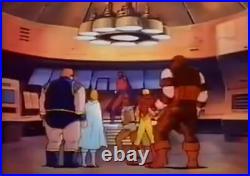 Many of the painted animation cels from the show that survived are notorious for having really bad line fading, a product of the Japanese. Ink that was used which wasn't meant to last because cels weren't seen as art. These colored pencil cel drawings, which were the basis for the painted cels.

Is where the real art is since they were drawn by the actual senior animators while the cel paintings were painted by anyone available. The highly detailed layout background of the Villains lair is all original and hand drawn.

It's colored in blue ink, blue marker and blue colored pencil while the outlines of Magneto, Toad, Pyro, Blob, the White Queen & Juggernaut are in faint regular pencil and yellow colored pencils. The dimensions are 10.5" x 10" with C-296 in the upper right corner along with some staple holes.

The cel drawing is in good shape with the upper left registration hole section cut out by the studio and Japanese writing in the upper left as well. A screen capture from the cartoon of the exact scene.

The first and second pictures are scans of the item your are. Comes from a pet free, smoke free home. This item is in the category "Collectibles\Animation Art & Merchandise\Animation Art".