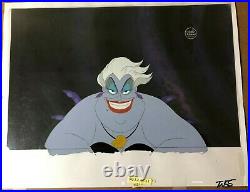 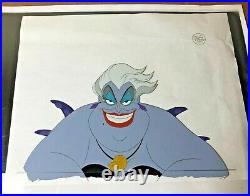 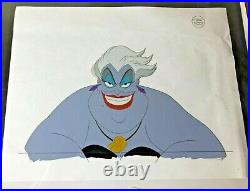 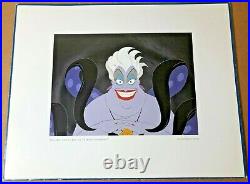 Original 12-field Production cel from the Little Mermaid (1989). This cel is from the iconic scene in which Ursula, after seeing Ariel in the magic globe, says She may be the key to Triton's undoing...

Perfectly centered and containing Ursula's signature evil grin, cels from this sequence are the best, and perhaps the most recognizable of all Ursula images. An Ursula image in the same sequence was used in Disney's 1999 release of 6 lithographs from the film.

This is a two-cel setup, with Ursula's tentacles are on the second cel. Cels are well-preserved and in excellent condition with no paint loss. Copy background and the 1999 Lithograph included as well. The item "Little Mermaid (1989) Original Production cels Ursula Ariel animation art Disney" is in sale since Thursday, May 27, 2021. This item is in the category "Collectibles\Animation Art & Merchandise\Animation Art". The seller is "benkin" and is located in Staten Island, New York. This item can be shipped to United States.