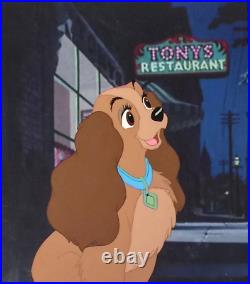 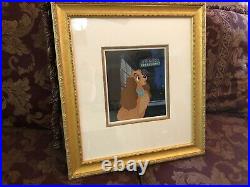 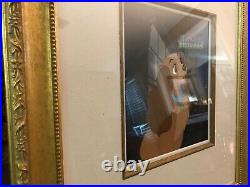 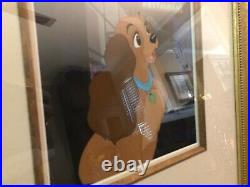 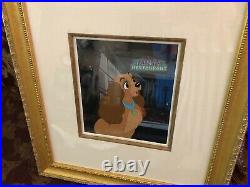 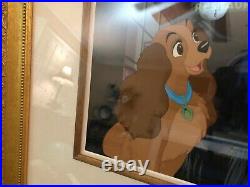 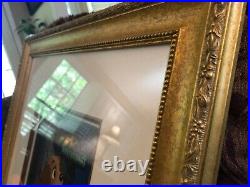 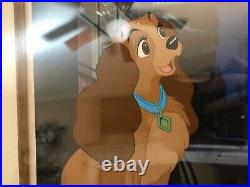 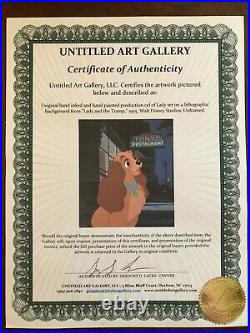 "Lady and the Tramp" (released on June 22, 1955) is a full length featured animated film produced by Walt Disney and released by Buena Vista Distribution. The film was the 15th in the Walt Disney Animated Classics series, and it was the first animated feature filmed in with the CinemaScope widescreen film process. The film was based on the story "Happy Dan, The Whistling Dog" by Ward Greene and tells the story of a female American Cocker Spaniel named Lady who lives with a refined, upper-middle-class family. Lady meets a male stray mutt named Tramp and they embark on many exciting and romantic adventures. One evening in 1937, Disney storyman Joe Grant invited Walt Disney over to his house for dinner and ended up showed Disney a drawing he had made of his pet springer spaniel, who was named Lady.

Walt loved the drawing and suggested that Joe make a storyboard out of it; which he did and the plan was to create a new animated film, simply titled Lady. The story that was pitched ended up being too simplistic to Walt Disney's taste, and the project was put on hold until about 20 years later. Although the spaghetti eating sequence is the best known in the entire film, Walt Disney was prepared to cut it; because he thought it would look both silly and not be romantic.

However, animator Frank Thomas was against Walt's decision and took it upon himself to animate the entire scene, without the use of lay-outs. Walt was so impressed by Thomas's work, that he kept the scene in the film. The spaghetti scene is usually referred to as the "Bella Notte" scene because of the romantic love song "Bella Notte" that is first sung by a chorus in the opening credits; and then by Tony and Joe while Lady and Tramp eat spaghetti together while on a romantic, moonlit date. The song has become an iconic love song, and the animated sequence is one of the most unforgettable Disney moments ever created. This cel features Lady outside of Tony's restaurant during the "Bella Notte" scene.

The item "Lady and the Tramp original Disney animation production cel of Lady" is in sale since Wednesday, April 28, 2021. This item is in the category "Collectibles\Animation Art & Characters\Animation Art\Production Art". The seller is "13th_window" and is located in Raleigh, North Carolina. This item can be shipped to United States.