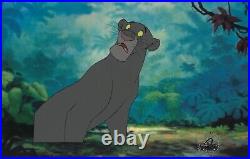 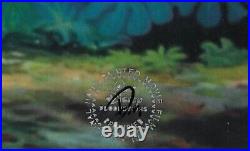 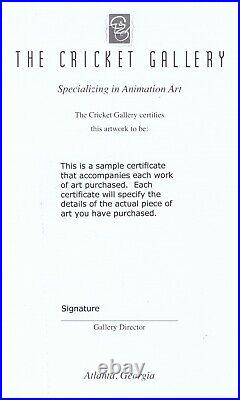 The Jungle Book Bagheera Production Cel (Walt Disney, 1967). The serious-minded panther Bagheera summons Mowgli to come along after being directed to return him to the Man-village. Presented is a fantastic hand-painted production cel. The hand-painted character measure 9 tall on a 16 field cel with Disney seal. Voiced by Sebastian Cabot, Bagheera served as Mowgli's guardian and Baloo's reluctant friend.

The popular character went on to star in several Jungle Book spin-offs such as The Jungle Book 2 and Disney Television's Jungle Cubs series. Certificate of Authenticity from The Cricket Gallery.

Boy, is found in a basket in the deep jungles of India. Who promptly takes him to Raksha, a mother wolf. Who has just had cubs. She and her mate, Rama, raise him along with their own cubs and after ten years, Mowgli becomes well acquainted with jungle life and plays with his wolf siblings. Bagheera is pleased with how happy Mowgli is now, but also worries that Mowgli must eventually return to his own kind.

One night, the wolf pack parents meet at Council Rock, having learned that Shere Khan. Pack leader Akela decides that Mowgli must leave the jungle for his own safety. Bagheera volunteers to escort him to a Man-Village.

They leave that very night, but Mowgli is determined to stay in the jungle. He and Bagheera rest in a tree for the night, where Kaa. Tries to devour Mowgli, but Bagheera intervenes. The next morning, Mowgli tries to join the elephant. Patrol, led by Colonel Hathi. Bagheera finds Mowgli, but after a fight, decides to leave Mowgli on his own. Mowgli soon meets up with the laid-back, fun-loving sloth bear. Who promises to raise Mowgli himself and never take him to the Man-Village. Shortly afterward, a group of monkeys. Kidnap Mowgli and take him to their leader, King Louie. King Louie offers to help Mowgli stay in the jungle if he will tell Louie how to make fire, like other humans. However, since he was not raised by humans, Mowgli does not know how to make fire. Bagheera and Baloo arrive to rescue Mowgli and in the ensuing chaos, King Louie's palace is demolished to rubble. Bagheera speaks to Baloo that night and convinces him that the jungle will never be safe for Mowgli with Shere Khan around. In the morning, Baloo reluctantly explains to Mowgli that the Man-Village is best for him, but Mowgli accuses him of breaking his promise and runs away.

As Baloo sets off in search of Mowgli, Bagheera rallies the help of Hathi and his patrol. However, Shere Khan himself, who was eavesdropping on Bagheera and Hathi's conversation, is now determined to hunt and kill Mowgli himself. Meanwhile, Mowgli encounters Kaa once again, who again attempts to eat him, but he escapes thanks to the unwitting intervention of the suspicious Shere Khan. As a storm gathers, a depressed Mowgli encounters a group of friendly vultures. Who accept Mowgli as a fellow outcast.

Shere Khan appears shortly after, scaring off the vultures and confronting Mowgli. Baloo rushes to the rescue and tries to keep Shere Khan away from Mowgli, but is nearly killed. When lightning strikes a nearby tree and sets it ablaze, the vultures swoop in to distract Shere Khan, while Mowgli grabs a large flaming branch and ties it to the tiger's tail. Shere Khan, who is terrified of fire.

Bagheera and Baloo take Mowgli to the edge of the Man-Village, but Mowgli is still hesitant to go there. However, his mind abruptly changes when he is smitten by a beautiful young girl from the village who is coming down by the riverside to fetch water.

After noticing Mowgli, she "accidentally" drops her water pot. Mowgli retrieves it for her and follows her into the Man-Village.

The seller is "milyjam" and is located in this country: US. This item can be shipped worldwide.