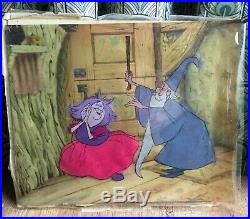 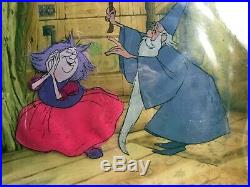 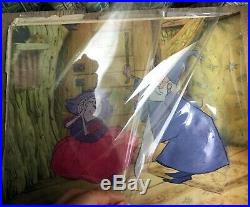 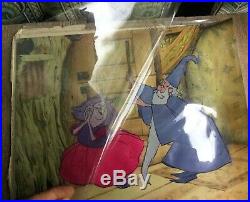 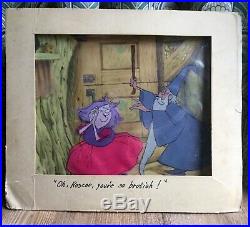 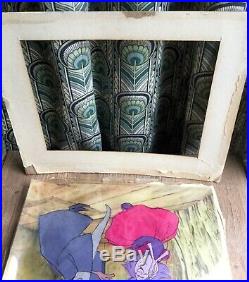 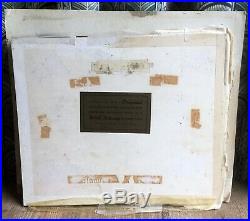 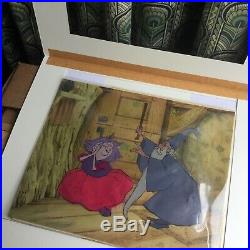 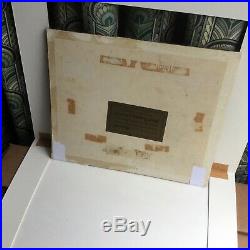 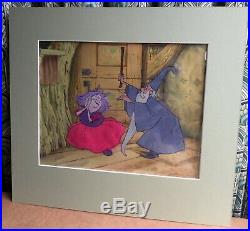 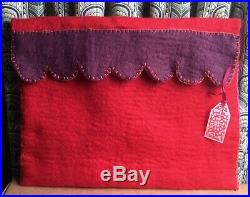 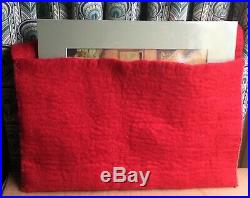 The marvellous Madam Mim is a fabulous witch and antagonist to Merlin the magician in the 1963 Walt Disney cartoon full length film The Sword in the Stone. This is an original hand painted multi acetate production celluloid - more commonly known as a "cel" - with original background, mount, and Disney label affixed to the back. I love Madam Mim because she is an early body positivity and female empowerment role model in my opinion. She can morph into whatever she wants including a dragon and a ferocious cat. She shifts into a thin, conventionally beautiful young girl but sings that "beauty is only skin deep" and reverts to her big bodies wild haired form - in other words, she is happy with the way she looks - she is, she declares marvellous!

This cel was given to me by my mum in September 2019 when I was home visiting her in US. Her side of the family is LA based and several of my aunts and cousins worked at Disneyland where this was bought circa 1963. The scene is Mim and Merlin in Madam Mim's cottage. The caption is Oh Roscoe, you're so brutish! The original mount is dirty and tattered as you can see in the photos.

At some point in time moisture got between the acetate layers on Madam Mim's pink skirt. This area of the cel doesn't lift up, i. The layers lift to either side of the skirt only. There is a bit of pink bleed near her feet, sleeve and on purple dress bodice. The sheets could be pulled up to release the skirt layer, but I have not done this as I can't really see the point.

There are 3 acetate sheets plus the background. The cel leaves and background are held to the original backing board with two small original metal staples. If you also want it, I'm happy to include a 1950 edition of the 1938 book The Sword in The Stone by T H White which was Disney's source for the movie.

The book was described by a 1938 reviewer as a "humorous satire". It is part of an Arthurian trilogy; the other two books are The Witch in the Wood and The Ill-Made Knight.

Mim makes brief appearances in The Sword in The Stone (including the battle with Merlin). Her cottage is described on page 78 as having a brass plate on the garden gate with the following inscription.

I'm puzzled by the caption as I don't know why Mim refers to Merlin as "Roscoe". I wonder whether this in an in-joke and refers to someone in the production crew or a fellow animator? Or maybe there is a "Roscoe" reference in The Witch in The Wood?

Madam Mim was animated by two of Disney's greatest animators Milt Kahl (who also designed the character, refining storyboard sketches from animator Bill Peet), and Frank Thomas. Kahl animated her first appearance in the film, her initial interaction with Arthur; while Frank Thomas oversaw her famous "Wizards' Duel" with Merlin. I've had a new conservation-quality mount made by a framer.

The original mount covered a bit more of the cel edges, so I had the new one increase the window space. The mount colour is a light green that picks up shades in the background of the cel (it looks grey in the photos, but it is a light mint green).

It is an archival mount and tapes and the framer created a mount "moat" so the original backing drops into the recess so the new mount front lies flat. The mount is wrapped in clear protective cellophane. I will also send the original mount front so you will have everything.

It is ready to give as a gift. Please note the felt envelope should not be washed as it will shrink. I'm a design, art, and architecture writer, Contributing Editor of COVER magazine, London which focuses on luxury textiles, rugs, interiors, and a Fellow of The Royal Society of the Arts. I can also hand deliver to Brighton, Bath, Bristol, Chichester. Thanks for looking and any questions please ask.