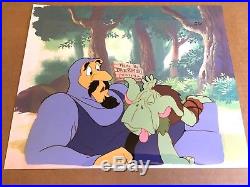 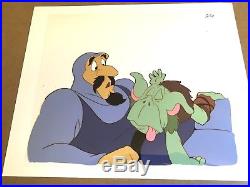 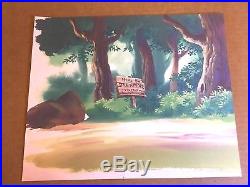 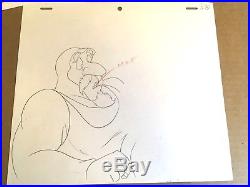 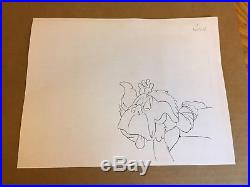 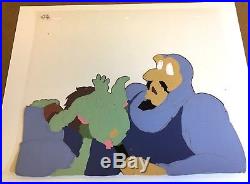 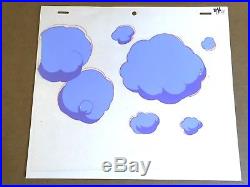 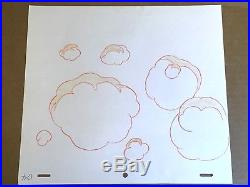 Gummi Bears Production Cel from the episode "Toadie's WIld Ride, " first airing Dec 7, 1985. This cel comes from the only scene in Gummi Bears in which Duke Igthorn expresses any concern about Toadie's life. Toadie flys through the window and crashes into Duke Igthorn. When Toadie seems unresponsive, Duke Igthorn actually seems worried that Toadie might be dead. So, we learn that despite the contempt Igthorn always shows to Toadie, deep down he really loves him. Of course as soon as it becomes apparent that Toadie is ok, Igthorn reverts to his usual meanness towards Toadie. Cel is in excellent condition with no paint separation and minor line fading.

The cel was never displayed and is in unusually good shape for a Gummi Bears cel. Original Drawing of Igthorn is included as well Toadie was a held image, so there was only one drawing of him for several drawings of Igthorn. A photostat of the original Toadie drawing is included. Cel comes on a non-matching Gummi Bears copy background that brightens the piece and makes it more presentable than the dark scene matching background.

Also included is the matching cel and drawing for the dust cloud effects. The item "Gummi Bears (1985) Production cel FIRST SEASON Igthorn Toadies Wild Ride Disney" is in sale since Monday, August 6, 2018. This item is in the category "Collectibles\Animation Art & Characters\Animation Art\Production Art". The seller is "benkin" and is located in Staten Island, New York.