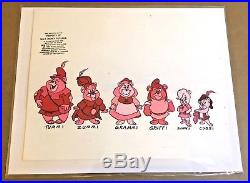 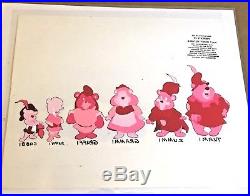 Probably used in drawing the Gummi Bears in dawn/dusk scenes. This cel was reportedly retrieved form a Disney dumpster in the 1990s along with other unwanted "worthless" art. Who knows the treasures that were not saved? The item "Gummi Bears (1985) ANIMATION production cel Disney model Cubbi Gruffi Tummi" is in sale since Monday, September 3, 2018.