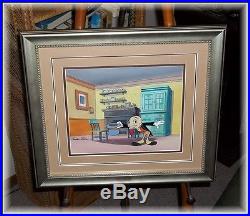 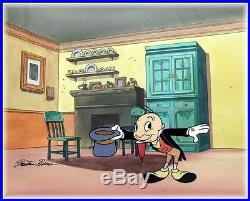 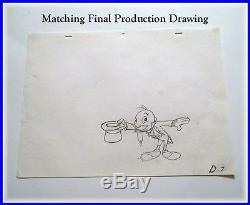 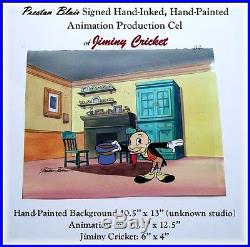 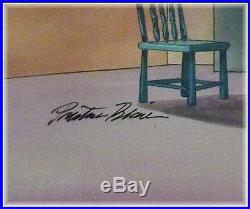 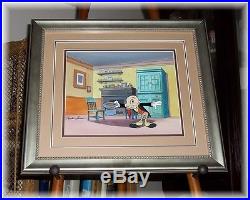 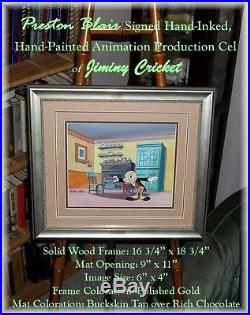 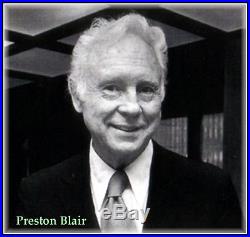 This original hand-inked and -painted animation cel and its matching drawing of Jiminy Cricket were created by artists working with animator Preston Blair in production of a television commercial for Royal Gelatin that aired on the Disney weekly television program in the 1970's. The drawing was created by an animator; the cel was made directly from it in the Ink-and-Paint Department and photographed in the making of the film. Preston Blair signed the cel in full to the left of the character. Handwritten designation D7 is written at upper right on the cel sheet and "D7" at lower right on the drawing to indicate each original's place in the scene.

Preston Blair (October 24, 1908 April 19, 1995) began his career in animation with Walter Lantz and Charles Mintz in the 1930s before joining the Walt Disney Studio later in that decade. He animated characters for Fantasia (notably Mickey Mouse and Hyacinth Hippo) and also worked on Pinocchio (1940) and Bambi (1942). He left Disney after the 1941 strike for Metro-Goldwyn-Mayer. There he joined Fred "Tex" Avery's unit. He is famed for his animation of the sexy nightclub star Red in six of Tex Avery's M-G-M cartoons.

In the 1960s he animated at Hanna-Barbera on The Flintstones and in subsequent years was involved in the development and production of animated films and commercials. Preston was an enormously talented artist in his own right, outside of animation. He is also one part of perhaps the greatest artistic triumvirate in animation & artistic circles, being the brother of Lee Blair and brother-in-law of Mary Blair. All three were graduates of the famed Chouinard Art Institute in Los Angeles (where Mary met Lee). All three Blair's became prominent members of the California Watercolor Society and all worked at some time in their creative lives for the Disney Studio.

Signed works by any of the three Blair Legends command premium prices in the art world. Preston Blair authored a number of art and animation instruction books published by Walter T. The first, Advanced Animation , was published in 1947 and revised several times into the 1990s. His titles Cartoon Animation and Animation 1 remain in print today.

This original is from the estate of Preston Blair. Certificate of authenticity is included. Frame Size: 14 x 16 (inner dimension). Frame Outer Size: 16.75 x 18.75.

Mat Coloration: Buckskin Tan over Rich Chocolate. Mat Opening: 9 x 11. Background: Hand-painted animation production background (unknown studio). Image Size: 6 x 4. Hangers: D Rings & Wire (Installed, ready to hang). Photos are always of the actual item being auctioned. Pay for it in the evening and it goes out the next day. Your feedback cheerfully matched same day posted. The item "FRAMED Preston Blair SIGNED Jiminy Cricket Production Animation Cel withDrawing" is in sale since Sunday, January 17, 2016. This item is in the category "Collectibles\Animation Art & Characters\Animation Art\Production Art". The seller is "fashiontime" and is located in Uniontown, Ohio. This item can be shipped worldwide.