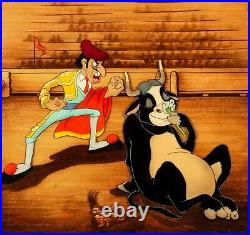 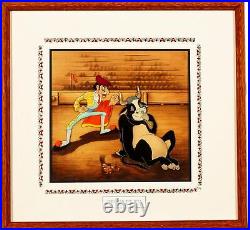 Production Cel Courvoisier Setup (Walt Disney, 1939). Much to the dismay of the Matador, Ferdinand would rather sniff flowers. This scene is from the Dick Rickard directed short that was released on 1939, and taken from the book. Won the Academy Award for Best Animated Short that year. As with most Courvoisier setups, the nitrate cels are trimmed to image and placed on a custom hand-painted wood veneer background. The characters together measure approximately 7" x 8" The art is framed under glass with a mat opening of 9.5" x 9" in a 17" x 16" frame. There are a couple of tiny flecks of paint missing from Ferdinand's left foot; otherwise, condition is Very Good. Certificate of Authenticity from The Cricket Gallery. In 1938, an art dealer named Guthrie Courvoisier was looking for something fresh and obtainable he could represent in his San Francisco Gallery.

At a time when post impressionism, realism, cubism, modernism and all sorts of other new "ism's" were being contested by other representatives, Guthrie turned to a man whose visions and renderings were not even considered true art: Walt Disney. Snow White and the Seven Dwarfs had just hit the theaters, not only delighting but also astonishing audiences. Being of the same mind, Disney granted Guthrie exclusive rights to market their Snow White and other original animation cels.

Short for celluloid, a cel is clear plastic sheet to which animation drawings are traced and then hand painted or, in later cels, machine transferred. Imagine a transparency sheet from your school days with a beautifully painted picture of a Wicked Witch or deer or some other character(s) or object on it. Celluloid supplanted rice paper as a "canvas" for non-photographic motion picture images in 1916. That's when newspaper cartoonist and animation pioneer, Winsor McCay discovered while making his short film, The Sinking of the Lusitania, that clear plastic sequential "character" and "special effect" (like falling rain) transparencies could be laid over a single "background" board without first cutting them out in silhouette and affixing them on.

Photographed one at a time, the illusion of motion was created when the reel of animated pictures was sequentially projected or played. Considering the fact that 85,000+ pieces of art must be produced for every 60 minutes of film, reducing the complexity of that art without diminishing quality resulted in a huge cost savings to McCay and other studios. Now, hundreds of hastily drawn "moving" cells could be adapted to single background plate that need not be changed until the animation script called for a change in scenery. Understanding cel methodology is important toward understanding the complexities of dabbling valuable animation art.

A cel containing say, just a single character like the Witch, as she was drawn in gradually changing positions over and over again on transparency sheets would not have fetched a tenth as much at the time. That is because a "character" cel is not only much more common than a "complete cel set-up" with characters cels, special effects cels and a background painting; it is not nearly as decorative when framed on a wall. Not compared to that entire striking image of the Peacock Throne Room and the Black Robed Witch emblazoned into the minds of theatregoers for the last 65 years. Walt Disney improved the numerous character cels he consigned to Courvoisier by employing a 20-artist crew to paint mock backgrounds reminiscent of the film scenes in which his imaginary heroes were engaged. "Because there are so many more cels than backgrounds in a film, we didn't have enough original backgrounds to work with, " the crew chief explained.

But it would have been inconceivable to send out any art that wasn't a finished picture. So when we ran out of backgrounds we made our own. To tens of thousands of antique collectors spanning the globe today, an early Courvoisier Disney animation cel is appreciated as a masterpiece of 20th century art and motion picture technology.

According to the Courvoisier website (they are still in business today) characteristics to look for are two small labels on the rear of the art, a construction paper backing, a large label with the name of the film either printed or handwritten on it, and the name of the film or character handwritten just below the opening. The studio matted the art and left the framing up to the gallery or new owner. When the art was prepared by the Courvoisier staff, (Disney transferred the making of set-ups to Courvoisier prior to the releasing of Pinocchio's art in 1939) Courvoisier added an "Original WDP" seal which was rubber-stamped at the lower right corner of the mat opening, and a similar seal, without the word "Original" on the background.

Courvoisier's enthusiasm for animation art proved to bear fruit. Don't you wish you could go back into time and bite into those apples! The item "Ferdinand the Bull Original Production Cel Courvoisier Disney 1939" is in sale since Wednesday, September 16, 2020. This item is in the category "Collectibles\Animation Art & Characters\Animation Art\Production Art". The seller is "milyjam" and is located in Alpharetta, Georgia. This item can be shipped to United States.