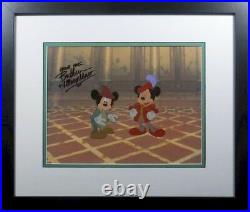 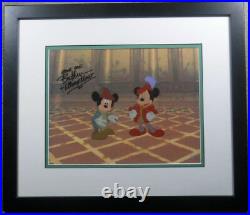 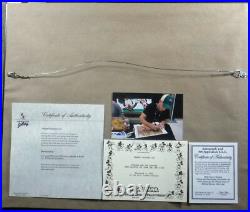 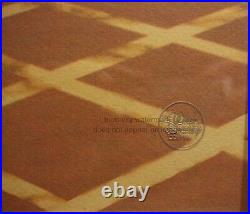 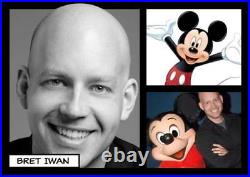 Prince and the Pauper hand painted original production cel from the 1990. Official Disney Seal, Official Disney Certificate of Authenticity. This 1990, original production cel is from Disney's Prince and the Pauper. All hand painted and one of a kind. 2 cel seat-up with Disney embossed seal in the lower right corner. Each Mickey is painted on separate cels, with each measuring 5x3 inches. Cel size 16 x 13.

Paint on the back is in really good shape. The film was the Disney Disney film to use hand painted production cels.

After this film Disney switched to scanning the images into a computer and having the computer color the images. This piece comes with 2 original Disney issued Certificates of Authenticity. Why is this a piece of Historic Disney Animation?? The Prince and the Pauper is an animated featurette produced by Walt Disney Feature Animation and directed by George Scribner. It is inspired by the Mark Twain story of the same name. It was Disney's final use of the traditional ink-and-paint and camera process, before the CAPS digital-ink-and-paint process rendered the traditional techniques and equipment obsolete. BONUS: Specially created background of the inside of the Prince's castle. BONUS-BONUS: Hand signed by the official voice of Mickey Mouse.... BRAND NEW Solid Wood Frame. Frame size 22 x 18 inches. Finished off with brown dust-paper and a wire hanger.

Bret first recorded Mickey Mouse dialogue for the Animal Kingdom theme park as well as the 2009 shows Disney On Ice: Celebrations and Disney Live: Rockin' Road Show. He gave his first full performance as Mickey Mouse for the English version of the PlayStation Portable game Kingdom Hearts Birth by Sleep, and the later Kingdom Hearts games ever since. He also gave his voice performance as Mickey Mouse in the Epic Mickey games. His first voice-over work in a Disney park could be heard in the Animal Kingdom closing show "Adventurers' Celebration Gathering" as well as on the Tomorrowland Transit Authority PeopleMover attraction at the Magic Kingdom, in which upon passing through Mickey's Star Traders, Mickey responds with his signature laugh and says That's right, it's outta this world! The Prince and the Pauper is a Disney animated short film directed by George Scribner and inspired by the Mark Twain story of the same name.

A very significant file in Mickey Mouse's history as it's Disney's final use of the Xerox ink-line process, which the studio's hand drawn animation department had used for three decades. The story centers around A poor boy and a prince exchanging identities and lives while the villainous Captain of the Guard plots to take advantage of this. The film was released on November 16, 1990.

Its run-time was approximately 24 minutes. Clarabelle Cow (voiced by Elvia Allman) is the only female character represented in this film; Daisy Duck and Minnie Mouse do not appear in this film. The item "Double Mickey Original Disney Production Cel Prince Pauper Signed Bret Iwan" is in sale since Friday, July 24, 2020. This item is in the category "Collectibles\Disneyana\Contemporary (1968-Now)\Animation Art, Cels". The seller is "toon-city" and is located in San Diego, California.