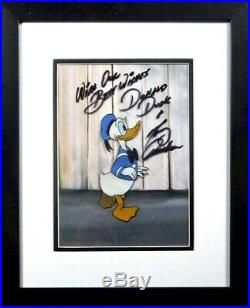 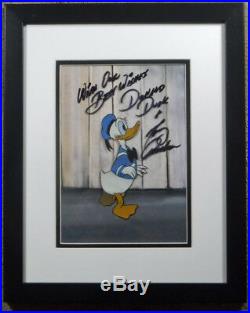 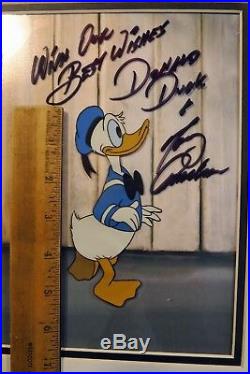 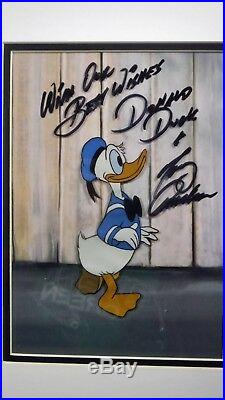 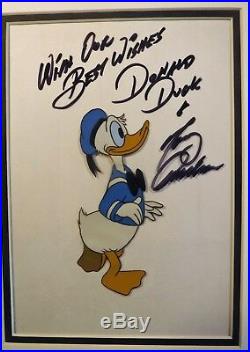 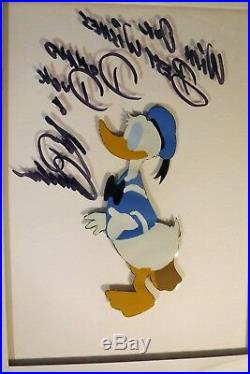 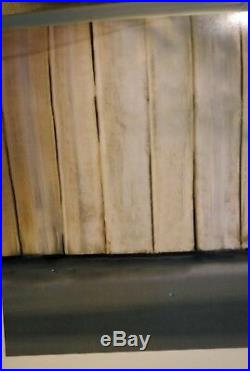 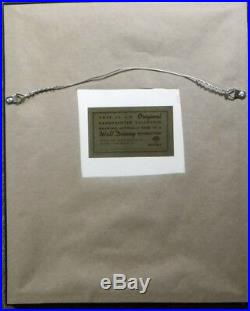 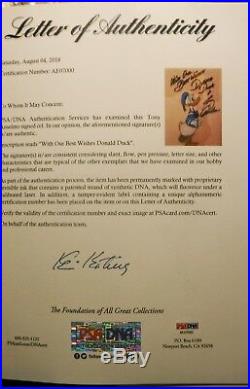 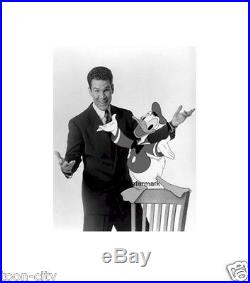 Expressive Donald Duck hand painted original production Disney cel from the 1950's. Hand signed by the voice of Donald... Certified with a Letter of.

This listing is for a late 1950's Walt Disney original production cel Donald Duck. This is an Art Corner Cel which is a Preferred cel to collect in the area of Original Production on Art. Cel size is HUGH at 8x10 inches, with a HUGE Donald painted on the majority of the cel.

Strong black ink lines are in great shape. This Set-up is complete with the Art Corner Gold Label on the back. Donald is 5 x 4 inches in size.

The cel has a slight impression of a bowl or dish above Donald's head. Looks like Disney previously used the cel and then washed it off and reused it again (a cost cutting practice, so it's kinda cool to have a washed cel). We created a custom background of the Gong from the Mickey Mouse Club opening of the 1950s. BONUS: This Beautiful image has been HAND Signed by the VOICE of Donald Duck...

The Signing was completed and witness by Toon-city staff members at a private signing. Tony hand signed this piece, this piece was signed "With Our Best Wishes Donald Duck & Tony Anselmo". With a Certificate of Authenticity. PSA / DNA certified with a Letter of Authenticity. BRAND NEW Frame Brand NEW Solid Wood Frame.

New Archival Matting, New Glass, New dust-paper backing, this piece is ready to hang out of the box! Piece has the Art Corner Certificate of Authenticity on the back.

It's very rare to have a Mint Condition Art Corner cel. Buyers should be away that this is a used cel and will always be imperfect and should be expected with this kind of cel.

This is a vintage original production cel. It is vintage, not new. It is considered to be an antique. If you are not an experienced collector of Art Corner cels then this is not recommended for you, the novice collector. There is no such thing as a'mint' condition Art Corner cel Set-up.

Inspect closely, might have areas of missing paint or cracking which is Normal wear for a 60 years old hand painted cel. Unfortunately, rookie buyers have un-realistic expectations of perfections.....

That's the perfect piece for you. Personally, as animation art collector of over 40 years. I LOVE Art Corner cels.

Their very existence is because Walt himself thought they were artwork and he made them available to the masses. They are one of a kind. Each was hand painted by Top Disney talent, the finest Disney artists at the studio.

Not some guy in a theme park, in a dark corner of a shop, doing drawings for 5 bucks. Simply speaking they are the ultimate Disneyland collectible.

The Art Corner Label on the back is the Official Disney Certificates of Authenticity. BIO : Tony Anselmo (born February 18, 1960)[1] is an American voice actor and animator. Since 1985, he has been the official character voice of Donald Duck. Anselmo moved from a student role at CalArts to a professional one at Disney animation, he was assigned to a new and more intense course of study at the Studio. Anselmo says, Ron Miller had just set up a program called the Disney School of Animation on the lot with Don Hahn, to train new artists in carrying on Walts traditions in character animation.

We werent even in production. We were being paid to animate tests with Eric Larson, studying life drawing with Walt Stanchfield, and learning more than we had at CalArts. It was an immersion in Disney character animation. One of the Disney stalwarts that Anselmo frequently encountered during his early days at Disney was Clarence Nash, the original voice of Donald Duck. Tonys friendship with Nash started casually.

Anselmo says, I was really just curious about it, because I could do voices, and that was one voice I couldnt do. Unable to duplicate the sound, Anselmo asked Nash to show him his technique. It took me a long time to learn that, and actually I think it took Clarence a while to perfect that as well, Anselmo says. The item "Donald Duck Disney Art Corner Production Cel Autographed Tony Anselmo" is in sale since Wednesday, November 6, 2019. This item is in the category "Collectibles\Disneyana\Vintage (Pre-1968)\Animation Art, Cels".