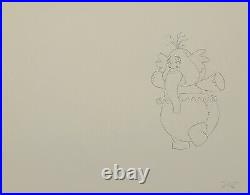 Although this is not explicitly stated, it is generally thought that heffalumps are elephants from a child's viewpoint (the word "heffalump" being a child's attempt at pronouncing "elephant"). H Shepard's illustrations in A. Milne's original books depict heffalumps (as seen in Piglet's dreams) as looking very much like elephants. In Disney's adaptations of the stories, Heffalumps are first mentioned in the 1968 featurette Winnie the Pooh and The Blustery Day, and seem to be a product of Tigger's imagination.

They appeared with their partners, the woozles, in a song called "Heffalumps and Woozles". Here, Tigger described them as honey-eating elephants. In both the animated films and all subsequent television series, they are also depicted as looking like elephants, albeit slightly cuddlier and less fierce than those Pooh imagines in the books, with rabbit-like tails and stitches as would be found on a stuffed animal.

In the animated television series The New Adventures of Winnie the Pooh, most heffalumps are enemies of Pooh and his friends. They are known to steal honey and are often associated with woozles. One particular heffalump named Heff was the dim-witted sidekick of Stan the Woozle and was afraid of Roo because he thought Roo was a giant mouse.

Piglet befriended a young heffalump named Junior in two episodes of The New Adventures of Winnie the Pooh. Junior lived with his parents, and his father, Papa Heffalump, was voiced by Jim Cummings. Mama Heffalump often had to remind Papa Heffalump of his many allergies.

They and the song are also featured in the attraction at the Magic Kingdom in Walt Disney World, Disneyland, Hong Kong Disneyland and Shanghai Disneyland, also called The Many Adventures of Pooh, where the riders travel through the heffalumps and woozles in Pooh's dream. In a fantasy sequence in the 2018 film Christopher Robin, when the title character almost drowns in a Heffalump trap, he hallucinates seeing an actual elephant as a Heffalump.

Up for sale is an original production drawing of a Heffalump. This is on an oversized paper (15.5 x 12.5) and comes with production notes and is numbered 213.

Piece comes unframed with COA. Framing options are available at an additional cost. Golden Rule Customer Service Guarantee. In the 26+ years of business our focus has always been on outstanding customer service. Our art is phenomenal and our collectors are extraordinary, so it is our pleasure to serve the two. We are committed to going above and beyond.

Whether it is hand-delivering a statue to an international collector or just having a nice chat with someone who calls in, our focus on "Customer First" knows no bounds. A Company With 26+ Years of Professional Pop Culture Art Experience. We have experience that virtually no one else in our industry can boast. Our commitment to authenticity, customer service, and care has gotten us to where we are.

It drives everything we do. Upon request, our return period may be extended past the default 7 day period. This item is in the category "Collectibles\Animation Art & Merchandise\Animation Art".