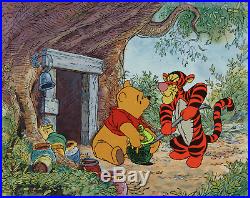 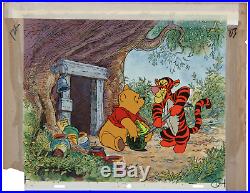 Winnie the Pooh Learns About Rules / Winnie the Pooh and Tigger Production Cel (Walt Disney, 1982). It appears that Tigger is trying to taste a smakeral of Pooh's hunny!

He will soon learn that Tigger's do not like funny! This is a unique 12-field, hand-painted production cel of Pooh and Tigger with the Hunny Pot.

Great two-character image measuring 4" and 5". The cel is on a print background for presentation purposes.

This 12-field production cel is paired with the original production background. Created by the Walt Disney Educational Film Division which made films and film strips using Disney characters to help educate students on a variety of topics. The item "Disney / Winnie the Pooh original production cel (1982)" is in sale since Friday, August 2, 2019. This item is in the category "Collectibles\Disneyana\Contemporary (1968-Now)\Animation Art, Cels".