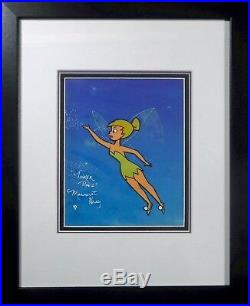 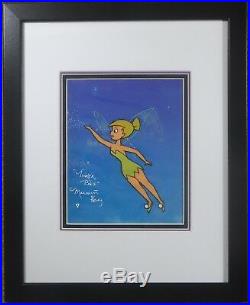 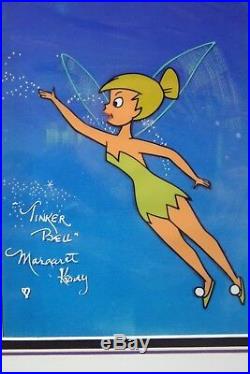 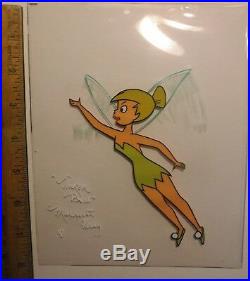 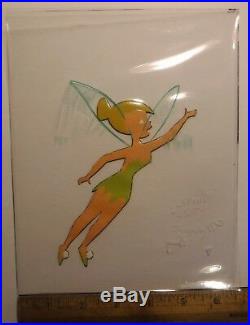 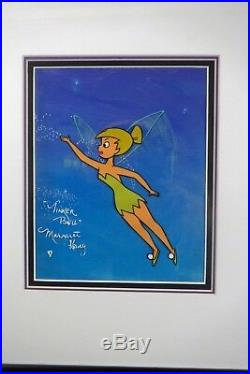 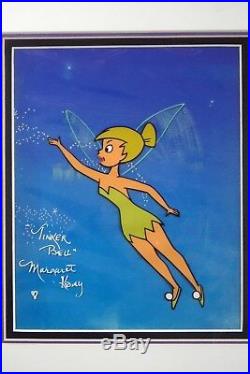 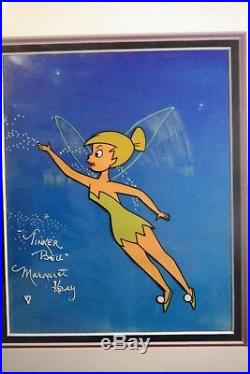 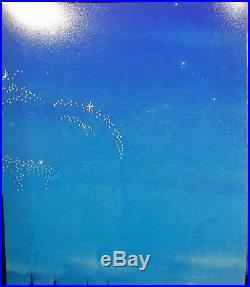 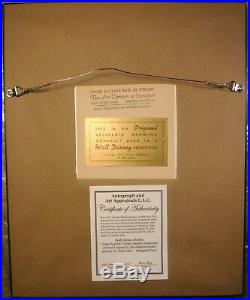 This a 2 cel set-up with the wings painted on the back cel. Margaret's signature is on the main cel. This Set-up is all hand painted. Ink lines are all HAND INKED. Cels size is about 8 x 6.5 inches, with Tink measuring about 5.5 x 4 inches.

Paint is in near perfect condition. Art Corner Pieces are Premium pieces to collect as it was the Only Official Disney Art Program from 1955 to the mid 1970s. We recently had this piece.

By the Original Tinker Bell model/actress, Miss Margaret Kerry. All Black Paint on the cel of Tink. This piece is a treasure in anybodies animation or Disneyana collection. BIO : Margaret Kerry (born Peggy Lynch, circa 1930, Los Angeles). Is an American actress, motivational speaker and radio host best known for her 1953 work as the.

Model for Tinker Bell in the Walt Disney Pictures animated feature, Peter Pan. Kerry answered an audition call during the planning stages of the film. The audition, supervised by Disney animator Marc Davis, required her to pantomime the motions that would eventually be animated as Tinker Bell, such as preening in a mirror at her feet. She won the audition and spent the next six months at the Disney Studios on a mostly empty sound stage pantomiming the role on film. The studios provided props as well, notably a giant keyhole mounted on a stand as well as a pair of giant scissors, later used in the scene in which Tinker Bell became trapped in a jewelry box.

Kerry also provided the basis of the red-haired mermaid in the Neverland lagoon scenes, with spoken lines. Since Disney released the film at about the time Marilyn Monroe had begun to make an impact, an urban legend immediately sprung up attributing the role to her. The item "Disney Tinker Bell 1950s original Production cel ART CORNER cel SIGNED New Frame" is in sale since Saturday, June 8, 2019.