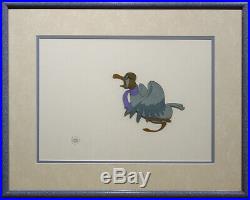 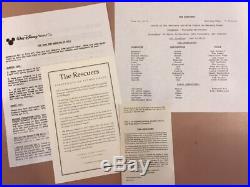 The Rescuers "Orville" Original Production Cel. From the 1977 Disney animated film, The Rescuers , comes this original production cel featuring one of the major characters from the film: Orville!

Used in the actual production. Of the classic film, this cel also features the official Disney seal in the corner.

Measuring 20 wide by 16" high framed (Orville himself measures 7" wide by 6 high), this The Rescuers OPC is offered framed with black-and-white speckled lavender moulding, acid-free double matting (tan outer, lavender inner), and plexiglass. Condition note: the cel has some slight waviness, consistent with a production cel. Having assisted both seasoned and novice art collectors since 1993, Barker Animation has remained one of the most trusted and preferred sources for animation and pop culture artwork in the world. Authorized and approved by more than 20 production / publication studios, all offered artwork comes directly from the studio in question (never previously owned, or from the secondary market) and arrives with the original Studio Certificate of Authenticity (if applicable). With thousands of originals, limited editions, and collectibles to choose from - it's no wonder why 13,000 collectors from 15 different countries proudly display artwork from Barker Animation in their homes and offices.