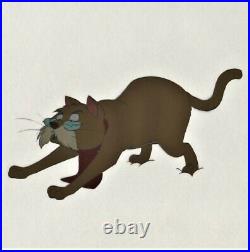 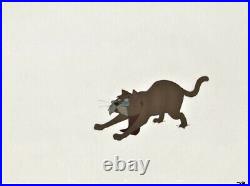 Disney The Rescuers (1977) Rufus Full-Figure Original Production Animation Cel. An original production animation cel painting, gouache on untrimmed animation cel sheet, image size:3.5" x 7.5". This excellent hand-painted animation cel of Rufus, the cat at Morningside Orphanage and a scarce character in animation art, was created in the Disney ink-and-paint department and photographed during the making of the animated feature based on the books by Margery Sharp.

The orphanage is the first stop for Bernard and Bianca in their mission to rescue Penny, and there they inspect Penny's meager belongings. The detectives awaken the sleeping Rufus, who is startled by the presence of mice and remarks: If folks find out that mice moved in here, I'll get kicked out...

" Bianca reassures him that they "won't be here long, " and in this scene he stretches and observes: "I'm a mite too old to be chasing mice. Ollie Johnston, one of Walt Disney's master animators known as his Nine Old Men, supervised the animation of Rufus, and he visualized the character as a caricature of himself. The elderly cat contributes to the plot by providing Bernard and Bianca with the important clue about Madame Medusa and her pawn shop.

And in a later flashback scene he consoles Penny, who has been passed over on adoption day, with the words. Well, faith is a bluebird you see from afar. It's for real and as sure as the first evening star. Studio designation "23" is written at lower right to indicate this cel's place in the scene. Certificate of Authenticity is included. This item is in the category "Collectibles\Animation Art & Merchandise\Animation Art". The seller is "efmbuys" and is located in this country: US. This item can be shipped to United States.