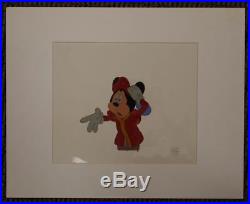 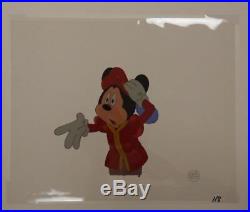 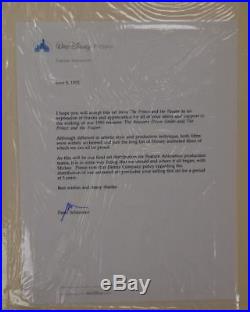 This Original Production Cel from The Prince and the Pauper features Mickey himself! Unframed, this is loosely matted (meaning the mat is tented). There are 2 cels - the Production cel has 3 peg holes; the outer cel has no peg holes and most likely bears the Disney seal as the production cel itself would have no seal (used in the production). The unframed cel measures roughly 12 1/2" W X 10 1/2" H. Mickey's image measures roughly 6" W X 6" H.

The cel has some slight creases, slight soil, slight scratches as it was used in the production. On the back of the mat is a letter from Walt Disney Pictures' Peter Schneider, dated 1992.

The item "Disney The Prince and the Pauper Mickey Mouse Original Production Cel Seal UF" is in sale since Wednesday, November 7, 2018. This item is in the category "Collectibles\Animation Art & Characters\Animation Art\Production Art".