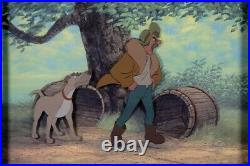 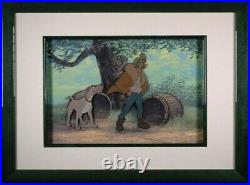 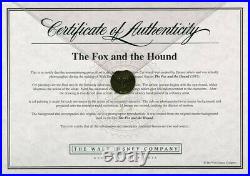 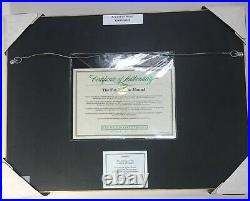 Disney THE FOX AND THE HOUND Original Production Cels Set-Up AMOS SLADE+ CHIEF, Framed with Disney Seal, background print and COA. Two (2) untrimmed original production animation cel paintings and background print. Overall painted cel image size: 7.5" x 8.25"; mat window measures 10" x 15" in17.5" x 23.5" x 1.5 frame. These two (2) lively full-figure hand-painted animation cels of Amos Slade and his old hound Chief, Tod and Widow Tweed's adversaries, were created in the Disney ink-and-paint department and photographed during the making of the animated feature. They are a near-match and were photographed in the same scene of the film. After the young Copper runs off to play with Tod, Amos Slade irritably remarks to Chief, Dagnabbit, that Copper pup's gone and strayed off again.

The cels were selected and prepared by Disney for distribution through its art program; they are set over a color print of the matching background from the film, and The Walt Disney Company seal appears on the cel of Chief at lower right. The art was handsomely matted and framed by Disney, and The Walt Disney Company 7" x10" Certificate of Authenticity is on the back in a sealed pouch. Ships UPS Ground to lower 48 States. The item "Disney THE FOX AND THE HOUND Original Production Cel Set-Up AMOS SLADE+ CHIEF" is in sale since Friday, August 21, 2020. This item is in the category "Collectibles\Animation Art & Characters\Animation Art\Production Art".