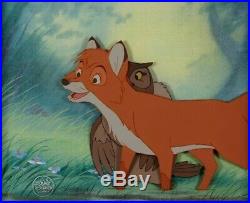 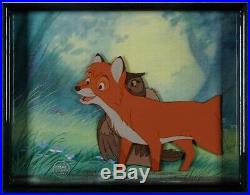 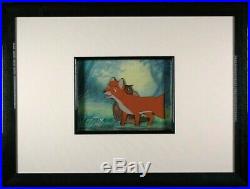 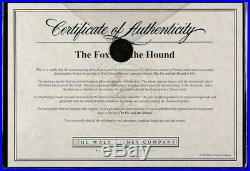 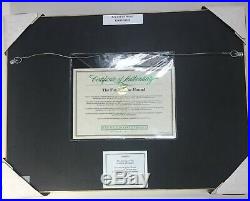 Disney THE FOX AND THE HOUND Original Production Cels Set-Up TOD + BIG MAMA, Framed with Disney Seal, background print and COA. Two (2) untrimmed original production animation cel paintings and matching background print. Painted cel image: 4.75" x 5.75", mat window: 7" x 9", frame: 17.5" x 23.5" x 1.75. These two (2) hand-painted animation cels of Tod, one of the film's title characters, and Big Mama, the kindly owl voiced by Pearl Bailey, were created in the Disney ink-and-paint department and photographed (likely together) for the same scene during the making of the animated feature. On the morning after his first night in the woods, "nothing looks beautiful" to Tod... Until he spies Vixey, that is. I wonder what her name is? Well, why don't you go ask her? So Tod walks in front of Big Mama in pursuit of his destiny: Yeah, I guess I will. The cels were selected and prepared by Disney for distribution through its art program; they are set over a color print of the matching master background from the film, and The Walt Disney Company seal appears on the cel of Tod at lower left. The art was handsomely matted and framed by Disney, and The Walt Disney Company 7" x10" Certificate of Authenticity is on the back in a sealed pouch. Shadows seen at the edges of the image in two of the pictures above result from the depth of the mat and are in the photograph only. The item "Disney THE FOX AND THE HOUND Framed Original Production Cel Set-Up Tod+Big Mama" is in sale since Tuesday, August 25, 2020. This item is in the category "Collectibles\Animation Art & Characters\Animation Art\Production Art". The seller is "efmbuys" and is located in La Palma, California.