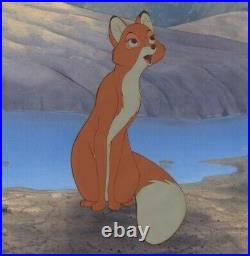 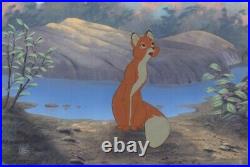 Disney The Fox and The Hound (1981) Vixey Full Figure Original Production Cel. If you treasure Vixey, you will be hard pressed find a better cel than this. This is an original production animation cel painting and matching background print.

Gouache on untrimmed animation cel sheet, cel image size: 7.5" x 3.5"; 12.5"x 15.5" overall size with an 11" x 17" background print. This beautiful, full-figure hand-painted animation cel of Vixey was created in the Disney ink-and-paint department and photographed during the making of the animated feature. It is from Vixey's first scene in the film in which she greets Big Mama, who is "looking for a fox named Tod" after his first night in the forest: Oh, hi, Big Mama.

Hey, what brings you way out here? The cel was selected and prepared by Disney as part of its art release program.

It is set over a color print of the matching background from the film and The Walt Disney Company seal is on the cel at lower left. Studio designation "201" is written at lower right to indicate this cel's place in the scene. A certificate of authenticity is included.

The item "Disney The Fox and The Hound (1981) Vixey Full Figure Original Production Cel" is in sale since Friday, October 15, 2021. This item is in the category "Collectibles\Animation Art & Merchandise\Animation Art". The seller is "efmbuys" and is located in La Palma, California. This item can be shipped to United States.