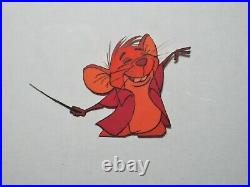 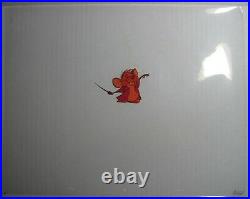 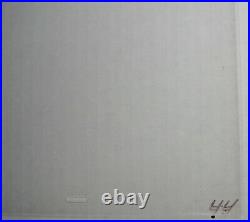 Disney THE ARISTOCATS (1970) Original Production Animation Cel of Roquefort. Original production animation cel painting, gouache on untrimmed 16 field animation cel sheet, image size: 2.25" x 3.5". This original hand-painted animation cel of Roquefort was created in the Disney ink-and-paint department and photographed during the making of the animated feature. Roquefort is a small mouse who resides in a mousehole located in Madame Bonfamille's mansion.

The brave and resourceful Roquefort is a loyal friend of Duchess and her kittens. This cel is from the ending scene where all the alley cats are playing and singing "Everybody Wants to Be a Cat" with Roquefort conducting. Studio designation"44" is written at lower right to indicate this cel's place in the scene. The item "Disney THE ARISTOCATS Original Production Animation Cel of Roquefort" is in sale since Friday, October 29, 2021. This item is in the category "Collectibles\Animation Art & Merchandise\Animation Art".