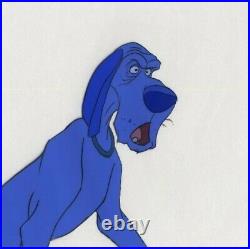 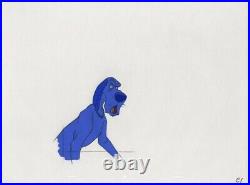 The Aristocats (1970) Production Animation Cel of Blue Napoleon. Original production animation cel painting gouache on untrimmed animation cel sheet12.5" x 16", image size: 4.75" x 4". This original hand-painted animation cel of Napoleon the bloodhound was created in the Disney ink-and-paint department and photographed during the making of the animated feature. This is a very rare "Blue Napoleon" cel.

This cel appears during the film's musical ending in which Scat Cat and his band play and sing "Ev'rybody Wants to Be a Cat". Napoleon and Lafayette appear under alternating blue and green light as the music plays, joining in and howling until Napoleon pulls rank on his compatriot: Wait a minute.

I'll say when it's the end. Studio designation "C1" is written at lower right to indicate this cel's place in the scene. This item is in the category "Collectibles\Animation Art & Merchandise\Animation Art".

The seller is "efmbuys" and is located in this country: US. This item can be shipped to United States.