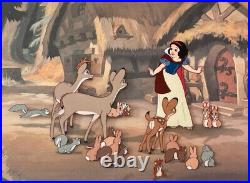 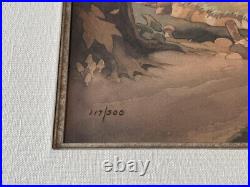 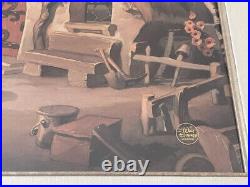 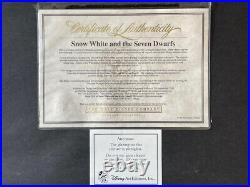 Snow White and the Seven Dwarfs is a 1937 animated musical fantasy film by Walt Disney Productions. Based on the 1812 German fairy tale by the Brothers Grimm, it is the first full-length traditionally animated feature film and the first Disney Animated feature film. It briefly held the record of highest-grossing sound film of it's time. Snow White was nominated for best musical score at the 1938 Academy Awards and the following year, Walt Disney was awarded an honorary Oscar for the film. This award was unique, consisting of one normal-sized, plus seven miniature Oscar statuettes. In 1989, the United States Library of Congress deemed the film "culturally, historically, or aesthetically significant" and selected it as one of the first 25 films for preservation in the National Film Registry. Up for sale is a limited edition cel featuring Snow White and some animals. Piece measures 19 x 40 framed is limited to only 500 and comes with COA. Thank you for looking and as Walt used to say, Dream, Believe, Dare, Do! Golden Rule Customer Service Guarantee. In the 26+ years of business our focus has always been on outstanding customer service. Our art is phenomenal and our collectors are extraordinary, so it is our pleasure to serve the two. We are committed to going above and beyond. Whether it is hand-delivering a statue to an international collector or just having a nice chat with someone who calls in, our focus on "Customer First" knows no bounds.

A Company With 26+ Years of Professional Pop Culture Art Experience. We have experience that virtually no one else in our industry can boast. Our commitment to authenticity, customer service, and care has gotten us to where we are. It drives everything we do.

Upon request, our return period may be extended past the default 7 day period. This item is in the category "Collectibles\Animation Art & Merchandise\Animation Art". The seller is "choicefineart-offthewall" and is located in this country: US.

This item can be shipped to United States, Canada.