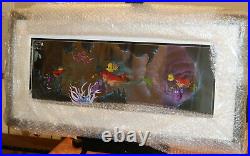 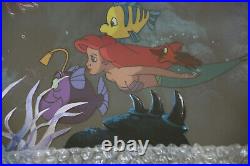 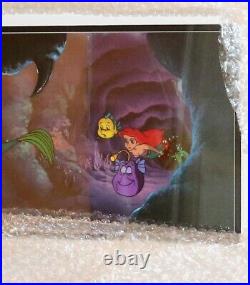 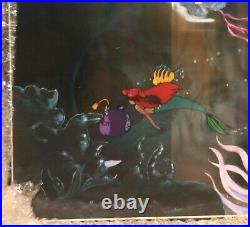 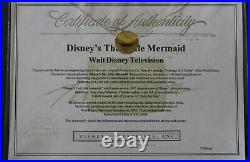 Disney's The Little Mermaid Production Cel. Original Production Cel from the episode Marriage in a Bottle of the Walt Disney Televisions Animated series Disneys The Little Mermaid. This Cel set-up is a number of cels that have been placed on a pan background to show how the movement was achieved in this scene. This is from show 5 Scene 74. This is a gorgeous pan size production cel setup from Marriage in a Bottle.

This was originally aired on "Message in a Bottle" is the sixth episode of The Little Mermaid TV series, originally aired on October 10, 1992. Ariel befriends Simon, a lonely sea dragon, after she, Sebastian and Flounder discover his message he sent in a bottle. The pan-cel measures 24 X 8 inches and framed 32 X 16 inches. The gold seal on the sleeve containing the Certificate of Authenticity has never been broken.

The item "Disney's The Little Mermaid Production Pan Size Cel (Three Cels) 24 Inches" is in sale since Monday, July 26, 2021. This item is in the category "Collectibles\Disneyana\Contemporary (1968-Now)\Animation Art, Cels". The seller is "mikewartnstuff" and is located in San Diego, California.