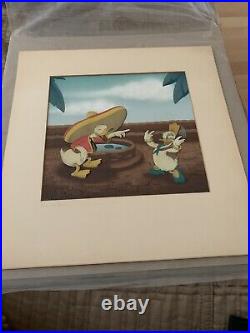 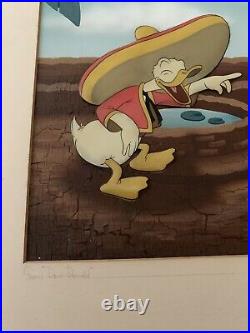 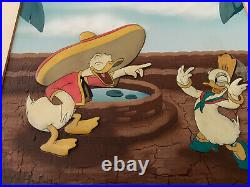 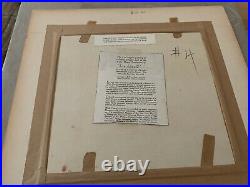 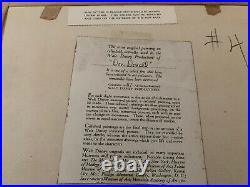 The short was directed by Ben Sharpsteen and Clarence Nash provided the voices for both Donald and Donna Duck. This is an important cartoon in terms of Donald Duck history.

This is a great hand-inked, hand-painted Courvoisier production cel of Donald and Donna Duck from the Mexican Hat Dance, with Donald and Donna laughing. This scene happens around the 1:27 mark into the short.

The cel are nicely trimmed full-figure images measuring 4 on a Courvoisier hand-painted background. Original Courvoisier mat with script writing is over the setup, with an opening size of 9" x 8". The original Courvoisier Certificate of Authenticity is mounted to the back.

It's a wonderful piece with brilliant colors. Overall condition is Very Good. Donald & Donna Duck are from 2 different scenes however paired together go well on the beautiful Courvoisier background and ORIGINAL MATTING. The item "Disney's Don Donald Donald Duck and Donna Duck Production Cel Courvoisier Setup" is in sale since Friday, August 28, 2020. This item is in the category "Collectibles\Animation Art & Characters\Animation Art\Production Art".

The seller is "vjm1174" and is located in Howard Beach, New York. This item can be shipped to United States.